Inside the game: Why the Phillies are seeing so many pitches

Inside the game: Why the Phillies are seeing so many pitches

Gabe Kapler marveled for two seasons as Johnny Damon, then the Red Sox’s bearded leadoff hitter, ground out long at-bats by fouling off pitch after pitch. No one saw more pitches on the 2004 Red Sox — the team that finally brought another World Series title to Boston — than Damon.

And the Phillies, under Kapler’s watch, are trying to copy that approach. The Phillies are averaging the most pitches per plate appearance in baseball, seeing pitches at a rate through 11 games that is nearly a half-pitch higher than the league average. Three Phillies — Cesar Hernandez, Rhys Hoskins, and Carlos Santana — are averaging rates that rank in the top 13 of all batters. The Phillies have built a lineup showing Damon-like patience.

“When you can work deep counts and you have a team approach to hitting like we have, where everybody in the lineup is thinking about grinding the pitcher down, that’s when you have the opportunity to score a lot of runs in an inning,” Kapler said Tuesday. “Big innings lead to wins. That’s how you put teams away. That’s how you deliver a knockout punch.”

It will take more than 11 games to see how much the Phillies can benefit from seeing pitches. But the early returns offer promise. Take away Saturday’s 20-run game, and the Phillies still averaged 4.8 runs in their recent homestand. The bats, after a slow first week, seemed to come alive.

The team’s ability to stretch at-bats is not by accident. Matt Klentak wanted to assemble a lineup of batters who “control the strike zone.” That’s why he signed Santana for $60 million, even if it meant moving Hoskins from first base to left field. The signing guaranteed two hitters at the top of their lineup who work pitchers.

They brought on hitting coach John Mallee, who spent three seasons as the hitting coach of Cubs teams that twice ranked in the top four of pitches per plate appearance. Mallee has stressed his grinding approach since the start of spring training. You don’t see pitches by being passive, he told his pupils, but by being selective. It worked for the Cubs in 2016, as they averaged the fourth-most pitches seen and finished first in walks and third in runs per game and OPS.

“It’s about playing to your strengths and being OK with taking a pitch that might be a strike but it doesn’t play into your strengths, especially early in counts,” Hoskins said. “Guys have really bought into that.”

Hoskins, who regularly bats fourth, finds an obvious advantage when the guys in front of him are stretching their at-bats. It’s not that he’s able to get a better feel for what the pitcher is throwing, but that the pitcher will be a bit fatigued by the time Hoskins gets to the plate.

“It’s such an elementary thought, and it’s probably something that’s hard to measure or quantify unless you’re in the box for pitch 20 or 25 of an inning,” Hoskins said. “But, he’s just not as sharp as he might be if he only threw 10 or 12 pitches. The leadoff hitter sees six, and the next guy works seven or eight. It’s passing the baton to the next guy.”

Members of last season’s coaching staff seemed to scoff about the number of pitches a batter saw. There did not appear to be much of an emphasis on a stat such as pitches per plate appearance. The Phillies were near the bottom in that category for two seasons, before finishing last year around the league average. Hernandez fell in line. He saw 4.2 pitches per plate appearance last season. It was slightly above average.

But this year, he has seen on average 4.7 pitches through his 50 plate appearances, nearly a pitch more than he saw two seasons ago. As Hoskins said, Hernandez has bought in.

“I feel more comfortable at the plate,” Hernandez said. “Years before, I would be scared at the plate when I got two strikes, because I didn’t want to strike out. Now, I’m learning that I’m a good hitter with two strikes. You know exactly who you are. I’ve gotten to know myself.”

Kapler did not know whether Damon’s technique was an art or a science. He never asked the outfielder whether he practiced fouling off pitches. Kapler just saw how good Damon’s hand-eye coordination was and knew that foul balls would come once Damon had two strikes. Other hitters would swing and miss, while Damon would foul off a pitch. It is an ability Kapler sees in Hernandez, Santana, and Hoskins. They, too, can battle to stay alive.

“Get to the next pitch,” Hoskins said. “If the guy throws seven or eight pitches in an at-bat, the higher the chances are that you’re going to see a mistake. He makes his pitch, and you foul it off to see another one — that’s kind of demoralizing for him. It gives us new life as hitters.”

He’s going to have to do it for more than two games in a row. But after watching Maikel Franco in the first two home games of the season, one has to wonder if he might be starting to get it.

END_OF_DOCUMENT_TOKEN_TO_BE_REPLACED 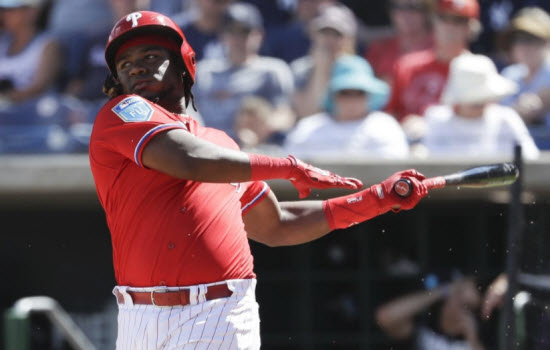 CLEARWATER, Fla. — Maikel Franco hit his first home run of spring training on Sunday. It was a beautiful shot to left field, a nice way to begin perhaps the most crucial camp of his career. But it was the placement of his left foot — the one that guides Franco’s swing — that might have been the most promising sight.
END_OF_DOCUMENT_TOKEN_TO_BE_REPLACED 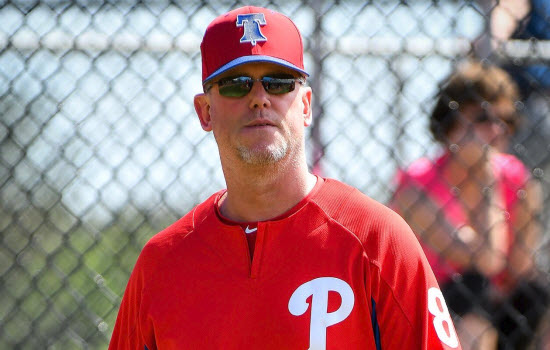 CLEARWATER, Fla. — Before John Mallee ever stepped into a batting cage with a Phillies hitter, he knew him.

He knew his strengths and weaknesses. He knew his tendencies. Mallee knew these things because after the Phillies hired him as their hitting coach in November, he dug deep into the numbers.

END_OF_DOCUMENT_TOKEN_TO_BE_REPLACED 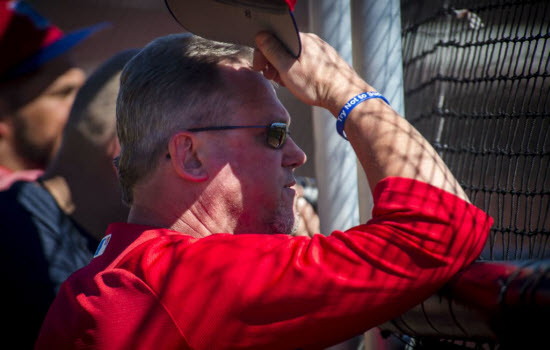 With a new Phillies coaching staff in place this spring, The Athletic is chatting with each of manager Gabe Kapler’s eight-person field staff for a Q&A.

CLEARWATER, Fla. – Phillies hitting coach John Mallee is in a familiar position.
His big-league coaching career has involved working with some of the best players in the game during the early stages of their careers – Giancarlo Stanton, Jose Altuve and Kris Bryant, to name a few. A Chicago native, Mallee, 48, joins the Phillies with an opportunity to mold a young, promising lineup that bolstered Philadelphia in the second half of last season. Some questions and answers have been edited for length and clarity.