Phillies’ Scott Kingery goes deep on changes at the plate

CLEARWATER, Fla. — When Scott Kingery was finally able to stomach seeing video from the horror movie that was his rookie season, he saw an out-of-control swing that did more slashing than Michael Myers and opposing pitchers who salivated at the sight of him walking to the plate, like Hannibal Lechter over a dish of liver and fava beans.

The real fright, though, came from a plate approach that was as mangled as Freddy Krueger’s face. 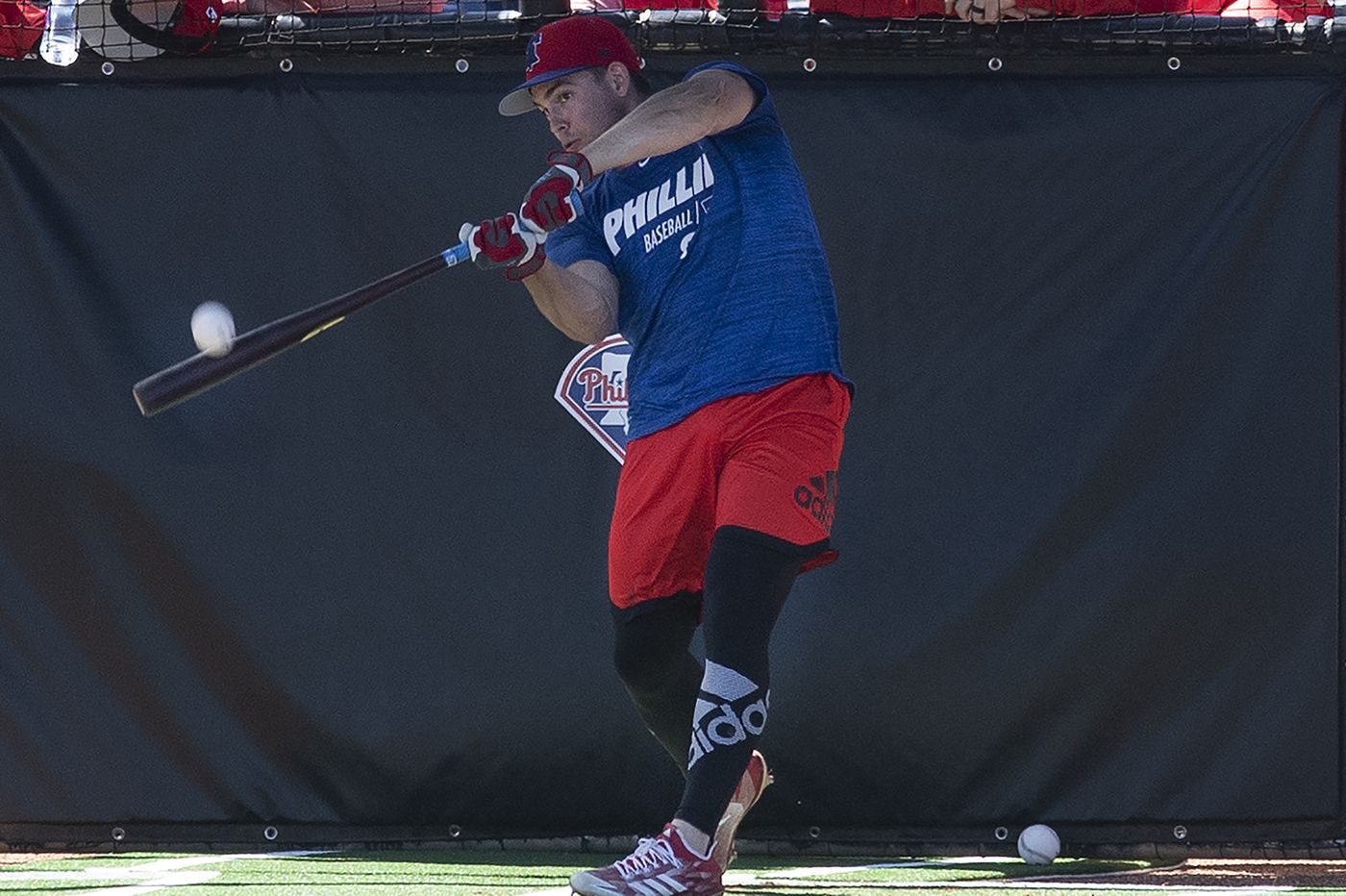 Kingery was an aggressive hitter at the University of Arizona and coming up in the Phillies’ farm system. But his major-league debut last year, which followed a sensational spring training and a $24 million contract extension, also coincided with the arrival of new manager Gabe Kapler and hitting coach John Mallee, who preach a “selective-aggressive” style. The idea: a) know your strengths as a hitter; b) attack only the pitches that are tailored to those strengths; c) lay off all the others.

Looking back, perhaps Kingery didn’t truly understand his own abilities. Or maybe, in his first exposure to the big leagues, the game was moving quickly. It probably didn’t help that the Phillies were using him at three infield positions and three outfield spots in a utility role that represented an adjustment for a 24-year-old second baseman who had all of 63 games of experience in triple A.

“I kind of got thrown into the fire,” Kingery conceded this week.

Regardless, after two relatively solid weeks, Kingery fell into a slump that only deepened. One thing led to another, and pretty soon he felt as lost as he looked en route to finishing the season as one of baseball’s worst hitters.

Of the 214 major leaguers who got at least 400 plate appearances last season, Kingery ranked 209th in on-base plus slugging percentage (.605) and 213th in Wins Above Replacement (-1.4), and struck out in 27.9 percent of his at-bats. He didn’t fare any better in the advanced metrics that Phillies officials value so highly, ranking 210th in both weighted on-base average (.263) and weighted runs created (62).

“When your swing’s not feeling good, you tend to have maybe one spot that you think you can get to a pitch,” Kingery said. “And then when that pitch is there, even if it’s a pitch that’s hittable, you don’t want to swing at it because the way your swing feels, you’re not going to be able to do anything with that pitch. That, combined with trying to see more pitches, it was just a combination of everything.

“There are so many factors that played into everything that happened last year. It’s hard to pinpoint one thing. It was a learning experience and something that obviously I need to fix and work on. You live and you learn.”

Kingery took a few weeks off after the season, then went out to southern California to train with New York Yankees slugger Aaron Judge and several other players represented by PSI Sports Management. One aspect of those workouts was another chance to consult Richard Schenck, a St. Louis-based hitting coach. Schenck helped Kingery’s agent, Dave Matranga, late in his career and has been working with Judge, Kingery and others for several years.

Through Matranga, Schenck declined an interview request in October. Matranga didn’t respond to a message this week. But Kingery said it was a comfort to work with Schenck again and regain the swing that enabled him to rocket through the Phillies organization after being drafted in the second round in 2015.

But Kingery realizes the biggest improvement must be in his plate approach.

Surrounded last season by Carlos Santana, Rhys Hoskins and Cesar Hernandez in a Phillies offense known for its discipline, Kingery tried to be selective. Instead, he routinely fell behind in the count. In 484 plate appearances, he got ahead only 116 times, sixth fewest in the majors. He dropped into an 0-2 count 76 times, sixth most in the majors, behind Yolmer Sanchez (86), Kevin Pillar (80), Corey Dickerson (78), Phillies teammate Odubel Herrera (78) and Dee Gordon (77).

Too often, Kingery didn’t have a chance.

“It felt to me like a guy could walk the two batters ahead of me and then when I came up, it was paint, paint, paint [the corners],” Kingery said. “I think Rhys might be more comfortable hitting with two strikes. It tightens his zone. Me, I’m the opposite. Two strikes, I tend to expand. There’s no reason for me to wait around to get into an 0-2 count. It’s the way I’ve always been at the plate. I got away from it. I don’t know what it was, but it started to happen.”

Mallee said he tried to intervene. He showed Kingery video and pointed out pitches early in the count that he passed up even though they were in his wheelhouse.

“We’d look at the at-bats the next day and go, ‘OK, where’s your strength? Your strength is in this zone right here. Here’s the first pitch. It shows up there. Why didn’t you swing?’ ” Mallee said before spring training began. “There’s always an answer. ‘Well, he kind of quick-pitched me’ or ‘I wasn’t ready to hit.’

“He started being more aggressive, and toward the end of the year, he looked really good. Those at-bats were so much better. So, the good thing is he knows what he needs to do with his swing right now and he knows from an approach standpoint how he needs to approach his ABs.”

Kingery tripled on the first pitch of his first at-bat in Friday’s Grapefruit League opener against the Tampa Bay Rays, although he was aided by an outfielder who fell down on the play. Still, could it have been a harbinger of a big year?

“I think it’s just being aggressive. That’s how I’ve been my whole career,” Kingery said. “I’ve never waited around to just see pitches. It’s always been, if he’s going to throw a fastball that I can hit first pitch, why would I wait around for another one? Especially at the major-league level, you can’t do that.”

Not without the season turning into a horror show. Kingery has no interest in an encore.