ST. LOUIS — The Phillies’ lineup, on paper, entered the season as one of the best in baseball 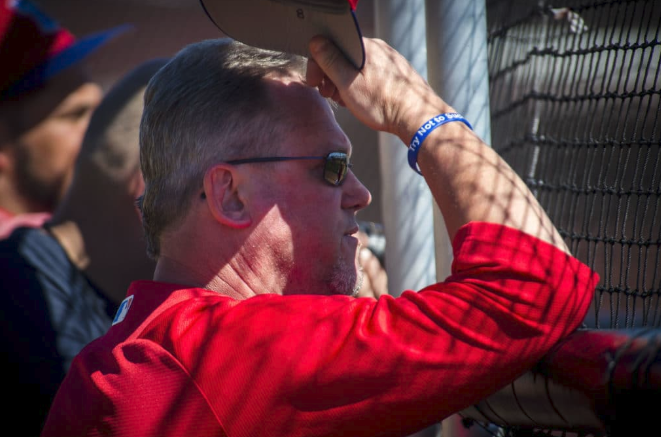 ST. LOUIS — The Phillies’ lineup, on paper, entered the season as one of the best in baseball.

A mix of young talent and proven All-Stars, the offense was expected to take a step forward in 2019. The Phillies have shown they can score runs in bunches. Through Thursday’s off-day, the Phillies’ +31 run differential was third best in the National League and the only positive differential in the division. They rank among the league leaders in runs scored, on-base percentage and walk-to-strikeout ratio, while sitting near the top-third in other key statistical categories including slugging percentage, wRC+ and OPS. Still, there is room to become a more consistent group, to improve their collective contact rate and how hard they’re putting balls in play.

This week The Athletic caught up with hitting coach John Mallee, who’s in his second season with the Phillies.

The Athletic: You had such a young group of hitters last year and now it’s very different this year with more veteran hitters. From a hitting coach’s perspective, what has that adjustment been like?

John Mallee: It’s nice because the veterans know themselves. Younger guys are trying to learn themselves and the veterans know themselves so there’s a few key things that when they get out of whack, they kind of know what those are. I’m able to just help them through that moment if they need it. Where with younger guys, you’re trying to figure out, when they get out of whack, what that really is. The maturity and the ability to get to the next pitch where if you feel like you’ve got to carry the team, sometimes, it’s tougher. When you know you’ve got help around you, it’s easier.

The Athletic: When you look at this offense, there have been stretches where it’s really good and can score a bunch of runs and stretches where it’s a struggle to string things together. What do you see as the greatest strength in this lineup and an area that you would like to see adjustments made?

Mallee: To construct the lineup, I believe in on-base percentage and slugging. So you get guys who are getting on base and then when they put the bat on the ball, they have a chance to get more than a single. So, they can walk and they can hit a homer. To me, that’s a recipe for scoring runs. We have enough guys in the lineup that the contact rates are so high you can give in a little bit on the strikeouts on some of the other guys, because the other guys are going to put the ball in play. (Andrew) McCutchen’s getting on base at a .380 clip and then Jean (Segura) hitting .330 and he’s not going to strike out. When Bryce (Harper) is Bryce, it’s lights out. And then you’ve got Rhys (Hoskins) behind him protecting him and J.T. (Realmuto). It just keeps going. And you’ve got your 8-hole hitter hitting .260 with 7 (homers) and 25 RBIs (entering Tuesday), who doesn’t strike out.

The Athletic: And what about what you would like to see improve as a whole?

Mallee: I think the more they play together and the more they get at-bats against these guys and figure out how they’re trying to get them out. You have to give the pitcher some credit, too. Like (Monday) night for example, (Cardinals pitcher Miles Mikolas) is throwing his slider right on the black and right on the corner, very few balls show up in the middle of the plate. So you have to give the pitcher some of the credit. Just the consistency day in and day out of quality at-bats. That’s what we stress mostly, the quality of the at-bat.

The Athletic: Do you buy into the idea that guys hitting in the same spot in the order almost every game makes a difference in terms of comfort level or anything like that? You guys have basically used the same lineup almost every day (this season).

Mallee: I think the players like it. They may tell you it doesn’t really matter where they hit. But the statistics will show it. Does Mikey (Franco) feel more comfortable in the 8-hole than he does in the 6-hole? I don’t know, but he’s hitting great in the 8-hole, right? So, I think the consistency in the lineup, coming out every day and knowing who’s who — you know the guy behind you, you know when you need to take a pitch because he’s going to go aggressive early here and there and the communication between the two.

The Athletic: You mentioned Harper just being off at the plate. What have you been seeing from him?

The Athletic: For veterans, do you just let them work through that?

The Athletic: You mentioned Realmuto. You’d seen him for most of his career between being the Cubs’ hitting coach and then with the Phillies. Has anything surprised you from getting to work with him on a day-to-day basis that stands out as to why he’s such a good hitter?

Mallee: Well, he can hit velocity, number one. The game is played around velocity. He can (hit) velocity, he can hit strikes with spin, which is very important and then he doesn’t expand out of the zone so the three key ingredients to being a good hitter. He’s physical. He can use the whole field. He’s best when he’s driving the ball to right-center. (Realmuto walks by and chimes in, “He stinks.”) The thing too, it’s funny because when Rhys was in Japan (this offseason), he texted me and says, ‘What do we have to do to get this guy?’ He goes, ‘He’s a team leader, he’s the quarterback. What do we do to get this guy?’ That was really cool because people who’ve played with him and know him, they know overall what he brings to a team.

The Athletic: You discussed slugging and on-base percentage, are there any other metrics to evaluate the offense? As a team, the Phillies don’t have a high hard-contact rate but are still slugging the ball well.

Mallee: We use wOBA and a single is better than a walk, a double is better than a single. We base (off) those things. Hard-hit percentage is key because it’s gone up. Ninety-five percent or better is a hard-hit. So we use quality at-bats. How good is your at-bat? Even if you make an out after eight or nine pitches, that’s a win for us because that way we’re getting deeper into the bullpens and we’re wearing pitchers down and that type of thing. And then we talk about productive outs. And if you look up the definition of a productive out, it’s any time you advance the runner with nobody out or any time you score a runner on third with one out. So, if we’re going to make outs — we get 27 outs, and they’re all not valued equally. So, late in the game, the outs become more valuable. Earlier in the game you can play the game a little more loosely in the sense of trying to do more things, take extra chances on the bases. And then later in the game, the outs become a little more valuable so you have to play a little more cautious. I think just putting the ball in play with runners in scoring position is the key to scoring runs. I’m concerned with runs scored.