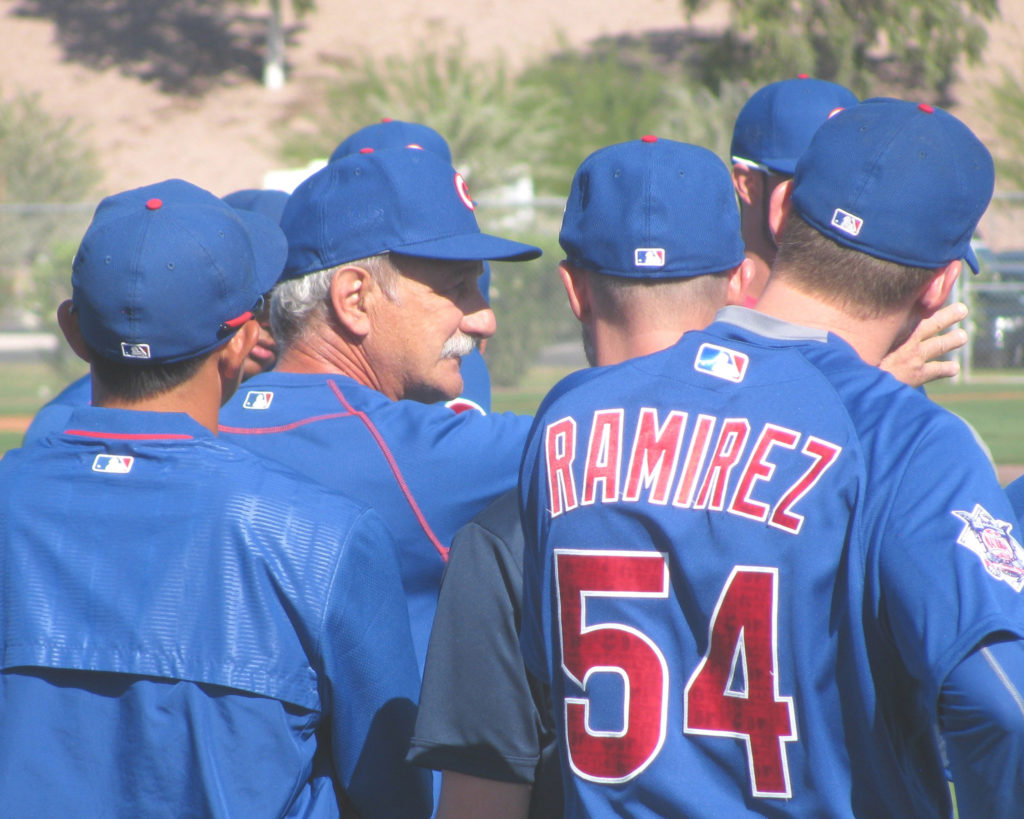 Not​ two​ minutes​ earlier​ he was​ talking​ about choking​ up on the​ bat,​ the scapular load in a swing​​ and bat control. Baseball things. Then, Phillies hitting coach John Mallee’s voice, once calm and confident detailing the kinetics of a swing, raised an octave. His eyes teared up.

What would he remember most, he was asked, about Dr. Ken Ravizza, a former colleague with the Chicago Cubs and one of the most renowned mental skills coaches in the world, who died last month.

“When I got let go by the Cubs, he called me …” said Mallee. His voice trailed off. The conversation was no longer about baseball. It was about life. “I don’t want to get emotional,” he said. Mallee took a second, gathered himself, and pushed forward, a most fitting tribute to Ravizza, who preached the absence of a past or future. There is only now, and how you deal with that moment that defines you.

Mallee remembered that phone call, and, for a second, he was not the Phillies hitting coach. He was back in that moment, unemployed one year after helping the Cubs to their first World Series title in 108 years.

Ravizza passed away at the age of 70 on July 8, six days after suffering a heart attack. No one did more to push sports psychology forward to where it is today, to ease the long-held stigmas strangling athletes that urged, no, screamed to ignore the mental side of the most humbling sport. If you didn’t, or couldn’t, you were weak, unfit to be a professional athlete. The game has come a long way. Much of that is thanks to Ravizza.

Despite working with many major league teams, the Phillies were never among them. Still, the reverberations of his passing — the loss of a trailblazer who helped make baseball a healthier, safer place — were felt throughout the Phillies organization, from players, to coaches, to the team’s first mental skills coach. That was the reach of Ken Ravizza.

Cole Irvin sat with his University of Oregon teammates, not knowing what to expect. Ravizza stood up front. Irvin was about to be introduced to a mental preparation technique for the first time. During the sessions, Ravizza asked the players to put their feet on the floor of the locker room, or hotel conference room, or football practice meeting room, to sit up tall in their chairs, release deep breaths, and feel as if they were rolling a rubber ball from their toes to their brain.

“He just had a different approach to calming yourself down,” said Irvin, now a Triple A pitcher in the Phillies organization. “That’s kind of one of the first things that I took away. From then on I really bought into the whole mental side of baseball.”

“At the time it didn’t even cross my mind that there was one.”

Irvin was far from the first or last player Ravizza touched, whose mind he opened to the human side of baseball that was always there but often misunderstood, or neglected all together.

Ravizza brought this side of baseball out from behind the shadows. Although psychology is a medical field, Ravizza didn’t approach his job as a mental skills coach as a medical endeavor.

The Phillies first full-time mental skills coach, Geoff Miller, hired in 2017, has known Ravizza since Miller entered the field as a student pursuing a master’s degree in sports psychology.

“And what Ken brought to the game was a big piece of the puzzle in baseball players and managers and coaches and GMs understanding that this is not a medical thing. This is an educational thing. This is something that we learn and can learn how to do. I think that was probably Ken’s greatest contribution to the game, helping people understand the educational side to this.”

Despite his prominence in the field, Ravizza wasn’t an intimidator force-feeding his beliefs because he was smarter, or held all the secrets. It was an education, a give and take from a world-class teacher who would have been just as content to be anonymous.

“He’s world renowned,” Irvin said, “and it’s not every day you get to really feel and be in the same room as someone of that nature. And he never tried to make it known. He was Ken. Ken was Ken, and he wasn’t going to change. He was in the room to make you better.”

Mallee worked on three different major league coaching staffs before Philadelphia (in Miami, Houston and Chicago) and saw varying mental skills resources along the way, both in availability and effectiveness.

“All the different places I’ve been, he was the best for me because he could relate to the player in baseball terms, not doctor terms,” Mallee said.

Because Mallee works with hitters who fail every day, his protégés must embody mental toughness. He learned from Ravizza how to get them through tough moments, just as Ravizza helped Mallee through his own difficult moment after his firing.

“Getting to the next pitch I think is a big deal,” Mallee said, bringing up one of Ravizza’s core concepts. “One thing that I learned that helped me with these guys is there’s no past, there’s no future. You have to play the game in the moment on this pitch. … That’s the thing I learned from Ken that I constantly bring to these guys.”

If you are in the moment, blissfully ignorant of the past or what lies ahead, there are no slumps. Slumps are elongated, agonizing stretches of inadequacy. In a moment, there is no agony. There are no oh-fers. There is only the next pitch.

“It’s about this pitch, right now, battling with the stuff that you’ve got that day,” Irvin said, recalling Ravizza’s teachings. “How are you going to make yourself better with one pitch? How is a position player going to get on at this one pitch when he just swung at a ball in the dirt?”

The mark of any good teacher, or “educator” as Miller called Ravizza, is an engaging dynamic that’s less like a lecture and more like a personal relationship. Ravizza’s pupils came out changed. Irvin didn’t just realize the mental side of baseball was important, he realized it existed. Epiphanies like these leave impressions, not just of the lessons learned, but of the teacher who opened those doors and the vehicles used to get the point across.

Cubs manager Joe Maddon knew Ravizza since their time together with the Angels in the 1980s. On the day his former mentor passed away, Maddon said, “I hear his voice in my head. He’s left an internal impact on all of us.”

“Ken had a distinct voice,” he said. “One that you would try to, not make fun of, but you’d try to recreate his voice with friends and teammates.”

Ravizza didn’t just teach at his players hoping they’d absorb whatever they could. He turned them into conduits for his own lessons, an extension of himself to reinforce what they’d learned. His voice came out of their mouths.

“You do things, you say things in his voice, and it just resonates even more with you,” Irvin said. “You don’t think about it at the time, you just make guys laugh, and we loved Ken. You do those things because you enjoy being around the guy.”

Ravizza’s teachings turned into a subliminal ventriloquist act, burrowing away into the players’ subconscious only to be revealed when needed most, including by those who had never met him before.

There was only one Ken Ravizza, but pieces of him live on in those he taught, and those with whom they shared his wisdom.

It wasn’t just players. Ravizza was a welcoming presence for others like Miller when he was trying to enter the field 22 years ago. Miller was working on his master’s thesis at San Diego State, focusing on selection factors influencing whether high school MLB draft picks skipped college, and needed to connect with southern California baseball players.

“I was introduced to him and he was gracious, he was welcoming and inviting from the beginning,” Miller said. “I think he was that way to everyone in the field and I think that was one of the magical things about Ken is he was so personable and made everyone feel important.

“The field has grown a lot in the last 10 years,” Miller said. “I’ve been doing this for 14 years, and when I started I think there were maybe four of us doing it, and now we have over 40 people doing it. If you ask most mental skills coaches in baseball who was an influence, Ken was an influence in one way or another and part of it was just taking a call from someone he didn’t know and being encouraging.”

Miller spoke from the Phillies dugout on August 5, a few hours before the late Roy Halladay would be inducted into the Phillies Wall of Fame. Halladay’s story is intricately tied to that of Harvey Dorfman, another famed sports psychologist. Many times, Halladay credited his success to Dorfman’s book, “The Mental ABC’s of Pitching,” which helped him regain his shattered confidence after a 2001 demotion from the majors to A-ball. Dorfman also authored “The Mental Game of Baseball,” which, along with Ravizza’s book, “Heads Up Baseball,” are considered the seminal works on mental skills in baseball.

“It’s ironic today we’re talking about this because Roy Halladay was so tied to Harvey, and Harvey touched so many lives, too,” Miller said. “Both Harvey and Ken, those are the two, if there’s a Mount Rushmore, there’s only two guys on it. It’s those two guys. … I don’t know if any of us would be here without Ken or Harry.”

Ravizza will be remembered for many things, including his catch phrases. He put a mini toilet in the Cal State Fullerton dugout in the mid 2000s as a reminder for players to flush away mistakes and live in the present instead of fixating on the past. “Flush it” became a signature phrase.

Irvin remembers Ravizza stressing, “Don’t poop on the mound. He used another word, though.”

“It was just recognizing at the time that in your failure, to recognize what you’re doing wrong and how to get back to calming yourself down to bring yourself back to whatever level you need to be at to succeed,” Irvin described. “And that’s really kind of cool to apply not just to baseball, but to your life as well. He taught me a lot more things than just that.”

Ravizza’s spirit lives on people like Miller as much as any other, being a prominent member of the field Ravizza helped bring into the mainstream. The two spoke a week before his death.

“That’s what’s interesting about Ken. There are so many phrases like that: ‘Flush it,’ ‘the focal point,’ all of the tweetable phrases,” Miller said. “But the thing I’ll remember about Ken is the friend, and just the amazing person he was. Because those phrases were the headlines, and there was so much more to him. I think that was his genius. Everybody knew ‘Flush it’, but when you sat down with him, he never said ‘Flush it.’ He asked people about themselves and asked them what he could do to help them.”

It’s not the catch phrases that will stick with Miller. It’s the person, a kind soul and his lasting impact.

“To the day he died,” Miller said, “he was not just a pioneer in the field, but someone who really cared and was a caretaker for sports psychology, and for the industry, and for mental skills coaches everywhere.”