Schererville resident, Phillies coach giving back to the Region

Schererville resident, Phillies coach giving back to the Region

John Mallee went to the top of his profession when he won the 2016 World Series with the Chicago Cubs as their hitting coach. Yet, every offseason he keeps going back to where the future of baseball gets started. 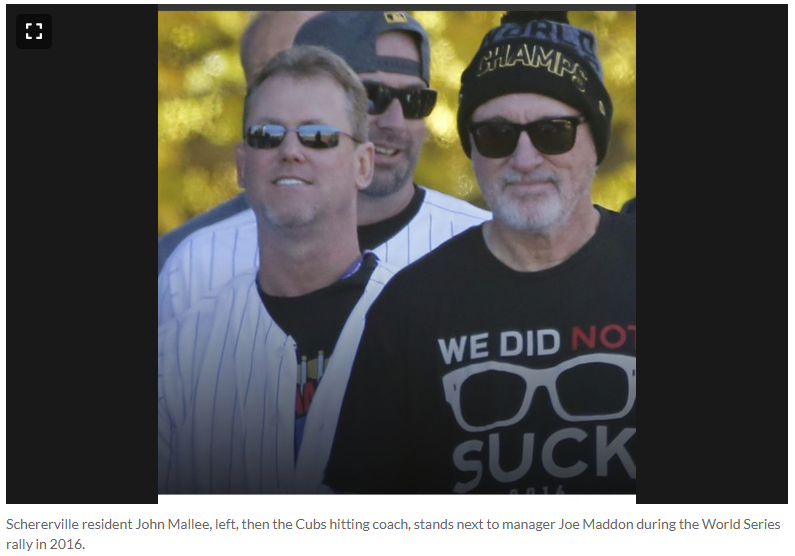 Mallee currently serves as the hitting coach for Philadelphia Phillies, who are in first place in the National League East. Mallee talked with The Times of Northwest Indiana freelance reporter Paul Oren during the All-Star break in advance of next week’s tryouts for the Shockers.

Q: What led you to start the Shockers?

A: My son was playing baseball in the area and there was an “A” team and a “B” team. The “A” team was going to practice all winter, so I said I’d take the “B” team and train them at my baseball school. I was told that only the “A” team could get the work. They weren’t going to let the “B” team have any instruction, so I decided to start my own program.
I had a tryout and I was hoping we’d get at least 10 kids. We ended up getting 60 kids going out for the team. I felt bad because I didn’t want to cut anyone, so I ended up having two teams. We split them up equally and kept everything fair. We built everything from there.

Q: How does the organization work?

A: We’re a not-for-profit organization and it took five years to get all that set up. It’s not easy to create a not-for-profit organization. We raise money and then all that money goes right back to the players. If your son goes out and sells $500 worth, that money goes right back to his players fee. The goal is to not have any kid pay at all. I get donations from Major League Baseball. … We have some scholarships available for people who need the help.

Q: Do players play full-time for the Shockers?

A: I believe in Little League Baseball. We have part-time teams for that very reason. We’ll train them all winter, they come and practice with us, but from age 8-11, we want them to experience Little League. I think Little League is important to play for your town and to play with your friends. Then when players get to 12 and 13, then we start looking at full-time travel baseball and putting more into it.

Q: How did you come in contact with your coaches in the program?

A: I’ve known Tom from our days of coaching with the Brewers. We’ve been around each other for a long time. I’m the godfather of his child. Jordan is someone that I gave lessons to when he was in school and then I brought my team to his Cy Young Academy later on. Jim and I have been giving lessons at the same baseball school and he’s great with pitching. He’s somebody I want my son to be around.

Q: You’ve coached at the highest levels of the sport and you’ve been around the youth. When do you see that spark where you can tell if they have a professional future?

A: You really start to see it going into their junior year of high school. You see their bodies mature and their arm strength. Kids that don’t make their varsity team as freshmen shouldn’t get discouraged. A lot of them haven’t had their growth spurts yet and it takes time for the body to mature. You can kind of predict who you think will make it as a junior and going into their senior year. I recommend all players to go to college first instead of going straight to the pros, unless you’re a supreme talent. It’s hard to turn down that money in the first two rounds, but you really become a man in college when you go away from home for the first time. It’s difficult to go straight from high school to the pros and that’s why you see so many guys who struggle in that transition.

Q: You’re in your first year as hitting coach with the Phillies. How did that job come about?

A: I was with the Cubs for three years and we won the World Series in 2016 with the youngest offense ever. We scored the (third) most runs and then we came back in 2017 and we still scored (the fourth most runs). We got to the playoffs and we were just gassed. We lost and then I was told they were going in a different direction. I chose the Phillies because they were the youngest team in baseball. I love teaching kids, I just love helping them. The Shockers are such a big deal to me because it’s about how we treat them and how we train them. One of the reasons I’m able to coach these kids (with the Shockers) is because it’s not my livelihood. I do this to truly help them out. I love teaching the game to younger players.

A: Well, there’s a bunch of things, but there’s two that stand out. The emotion of David Ross’ last game. Just the embrace we had in the batting cage and this feeling of going out and riding off into the sunset with him. The second thing that stood out is when they gave up that home run to Rajai (Davis). The stadium was shaking and it was so loud; I just felt so bad for Aroldis Chapman. Nobody wants to be in that position and I knew it would stay with him for the rest of his life if we lost that. Then the last one was the meeting during the rain delay. It was the confidence the players had. They got together, said “We ain’t supposed to be here, so let’s go win it. We’ve got the top of the order up, we’ve gone through all their pitching. These guys are done.” It was the best baseball game and I got to coach in it. I think about it every day.

Q: What is new with the Shockers this year?

A: We’re branching off to a 16U team. We pay the coaches and we’ve got the right people coaching them. We’ve got a feeder program to get players ready for their high school teams and to get ready for college. We start them off part-time, get the kids into Little League, which is important, and then when they turn 13, we turn them into a full-time Shocker. We’re excited for the 16U team. We had two 15U teams last year and now we’re moving them on.