The bases were loaded with one out in the seventh inning on May 1 when Maikel Franco came to the plate to face Detroit Tigers reliever Victor Alcantara.

In the past, that wouldn’t have been a favorable matchup for the Phillies.

“Last year,” manager Gabe Kapler said, “against a hard sinkerball pitcher, that was likely a ground ball to the left side.”

But for the better part of a year now, the Phillies have filled Franco’s head with numbers. They have educated him on his average exit velocity (good), his launch angle (bad) and his ground ball rate (too high), and taught him ways to improve on the latter concepts.

And they have made the 26-year-old third baseman a believer in analytics. 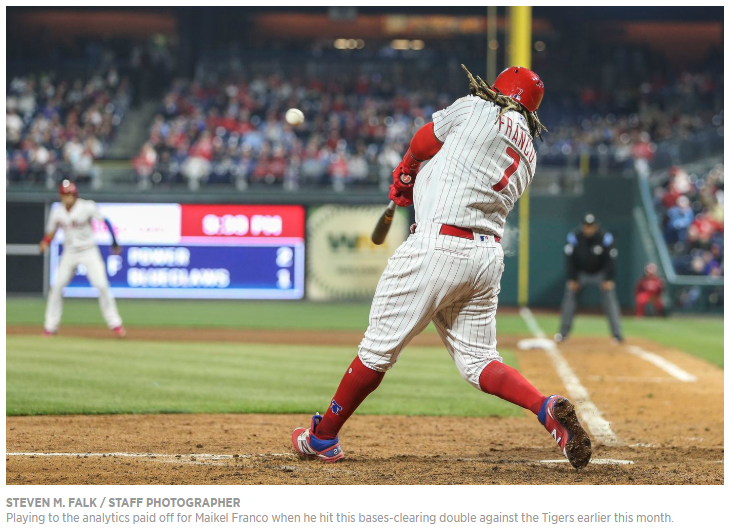 o, Franco had one objective against Alcantara: Hit the ball in the air. Sure enough, after fouling off a pitch on his hands, he lifted sinker into the right-center field gap, clearing the bases and giving the Phillies the lead en route to a 7-3 victory.

Consider it a win for analytics, too.

Look, baseball’s data and technology boom isn’t for everyone. Just ask the veteran scout, the baseball lifer, who crisscrosses the country for nine months every year to watch games, evaluate players, and write reports based on what his eyes tell him. He trusts his eyes more than any statistics on page. He rails against modern sabermetrics, distrusts hi-tech tracking devices, and loathes the wave of numbers-crunching young executives that are filling front offices. He’s wary that those elements are taking over the game, not in a good way.

But analytics are here to stay. For years, the Astros, Dodgers and Cubs have been on the cutting edge of using data and technology to their advantage. And since the advent of Statcast in 2015 made more information available to everyone, the rest of the league is getting in on it, too. 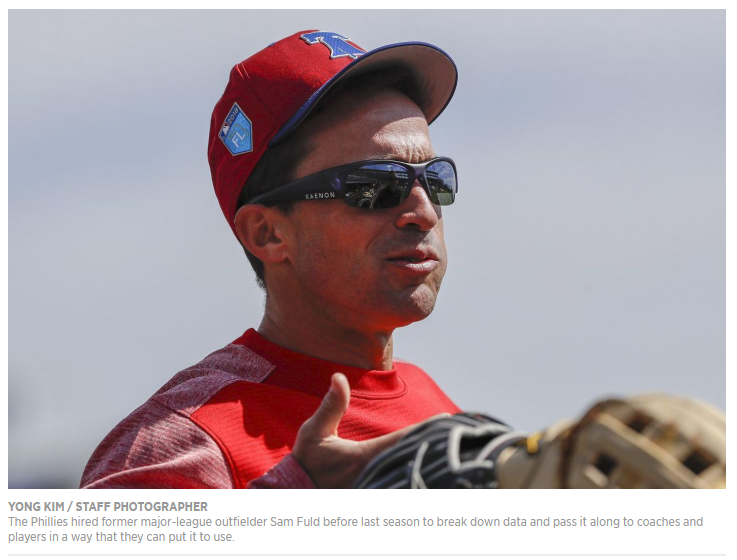 The Phillies were far behind until four years ago, when owner John Middleton directed a considerable investment in technology and personnel. They hired a quantitative analyst away from Google to lead a staffed-up research-and-development department, then gave him more to analyze by equipping their batting cages in the major and minor leagues with HitTrax, a tracking system that offers immediate feedback about launch angle, exit velocity and projected outcomes. On the pitching side, they use Trackman and other technology that reveal metrics such as spin rate, movement, break and pitch shape.

Before last season, they hired Kapler, an outside-the-box thinker with an analytical bent. They added former major-league outfielder Sam Fuld in a newly created role to break down the information culled by the R&D folks and pass it along to players and coaches. After last season, they tapped Driveline Baseball, a data-driven training lab in Kent, Wash., to hire a new minor-league hitting coordinator and a pitching strategist.

“It’s cool how fast this thing has evolved, which isn’t typical of baseball,” Fuld said. “It still is, in a lot of ways, a slow-moving game. But from an analysis standpoint, it’s taken off.”

When the Phillies’ process is working best, information flows between the R&D staff, Fuld, coaches and even players. Hitting coach John Mallee, for instance, often receives data from advance scouting manager Mike Calitri or scouting coordinator Josh Studnitzer and passes it along to Fuld for additional context before taking it to the batting cage, where he advises a hitter to make specific changes to mechanics or plate approach.

Right-hander Zach Eflin puts it another way. The Phillies’ analytics team helps him to think less when he’s on the mound.

“In between starts I learn a lot about what was working that day, how I was gripping the ball, how is my backdoor sinker, my backdoor slider,” said Eflin, who has turned that information into a 2.47 ERA and two complete games in eight starts. “They do a great job of giving us all these spray charts and hot zones and heat maps that we get to digest, so when it comes time to pitch we can worry about just go out and executing. It makes life a lot easier when you’re out there not thinking too much.” 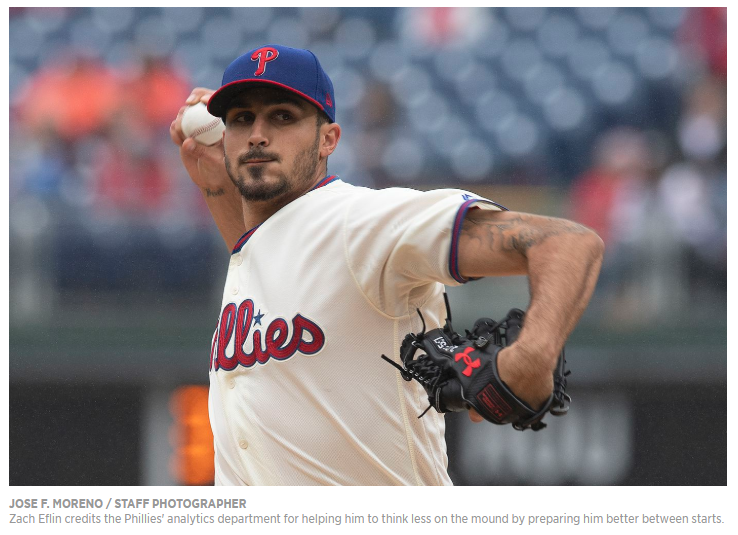 In Franco’s case, a few things stood out to the Phillies’ analysts last season. First, he hits the ball hard, posting an average exit velocity of 89.1 mph from 2015 through 2017. Next, he puts the bat on the ball frequently, with a 77.8 percent contact rate and only a 15.9 percent strikeout rate over that three-year period. But he also hit the ball on the ground 45.4 percent of the time in part because of an average launch angle that was only 11 percent.

The Phillies poured over the numbers and concluded that Franco would be more dangerous a hitter if only he could get the ball in the air more often. But that would require an overhaul of his swing. Mallee introduced foreign-sounding concepts such as “spine angle” and tried to get Franco to tilt his shoulders skyward. By changing his swing path, Mallee believed those scorching grounders to shortstop and third base might wind up as doubles and home runs to left-center field.

At times last season Franco seemed to apply what Mallee was preaching. Overall, though, his launch angle actually slipped to 9.5 percent while his groundball rate rose to 49.5 percent, according to Statcast.

“During the season it’s tough to do because these are pretty major adjustments,” Mallee said. “He would practice something and in a game he’d revert back. It took this offseason just to commit to it.”

Franco went home to the Dominican Republic without a guarantee that he would be back with the Phillies, who were courting free-agent third baseman Manny Machado. But he stuck with Mallee’s hitting plan and even sent videos throughout the winter to demonstrate his progress. 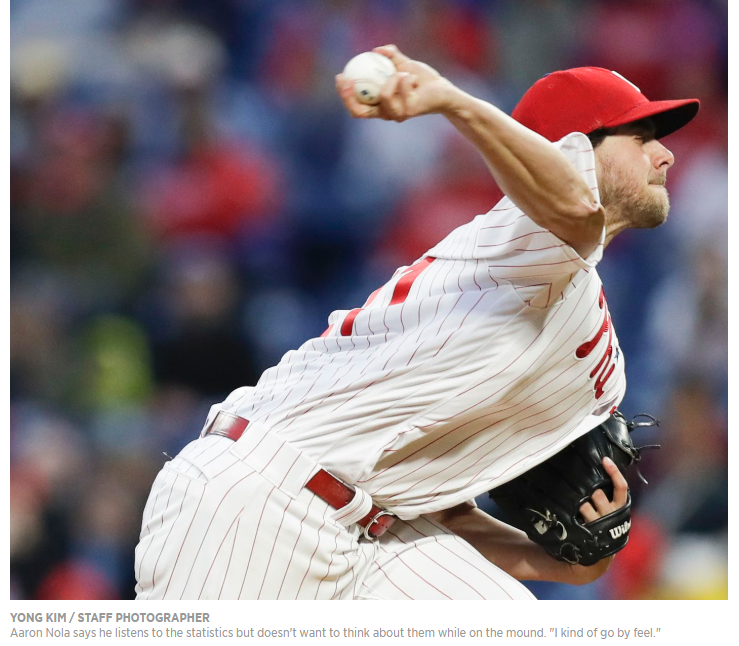 Not every Phillies player does a Greg Louganis dive into the numbers. Most recognize the value in having more data at their disposal, but plenty still feel leery about cluttering their brains with too much information.

“I kind of go by feel, how my body’s moving, the ball off my fingertips, the backspin of it,” ace Aaron Nola said. “I’ve done it like that for a while, and I think I’m going to still do it. I’m not taking away any of that stuff, the stats. I’ll listen. I’ll take those in consideration. But at the end of the day, I don’t want those things to take away my competitive nature, and I don’t want to think about those things on the mound.”

Besides, all the metrics in the world are only as good as how they’re interpreted and applied, which is what makes Franco’s early-season success so rewarding for the Phillies.

Entering last weekend’s series in Kansas City, Franco’s launch angle was up to 17.6 degrees, a career high. While the average ground ball in the majors was 45.7 percent, Franco’s was down to 40.9. His strikeout was down, too, to 10.6 percent, sixth-lowest in baseball. And despite batting primarily in the No. 8 spot, he was tied with Bryce Harper for second on the team with seven homers and had 27 RBI, trailing only cleanup-hitting Rhys Hoskins (11 homers, 32 RBI).

“I think what it is with Maik is he’s put a lot of effort into his swing mechanics, into his approach,” Kapler said. “It’s very important in his own mind to get the ball in the air because of the ground balls that he hit last year. He doesn’t want to be that guy.”