ST. LOUIS — Sometimes it is easy to forget Rhys Hoskins’ relative inexperience at the big-league level. 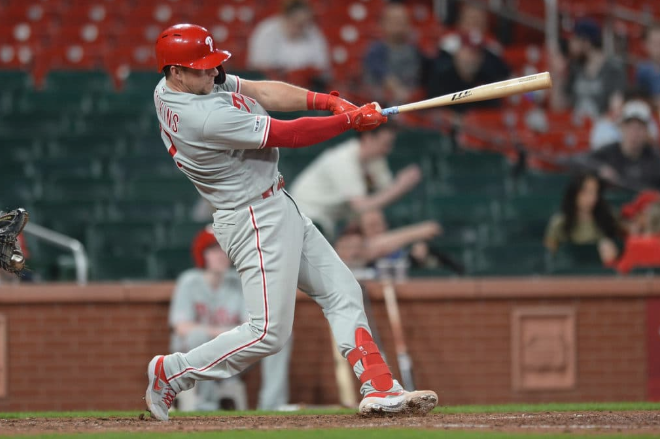 Despite just over two seasons’ worth of game time in the majors, Hoskins has developed a reputation for displaying a balance of power hitting and plate patience, which has become amplified this season for the first-place Phillies. After going 4-for-5 with a double and a home run in Tuesday’s 11-1 win against the Cardinals, Hoskins is now hitting .302 with a .425 on-base percentage and 1.076 OPS through 34 games. That combination of production was last sustained by a big leaguer over a full season in 2006 by Cleveland’s Travis Hafner and former Phillie Ryan Howard in his MVP season.

As part of a deep lineup boasting former MVPs and veteran players, Hoskins and his contributions might be flying a bit under the radar. But make no mistake: Hoskins has been one of the best hitters in baseball over the first six weeks of the season.

“I’m still a young player in this league, I haven’t seen a whole lot of these guys that we’re facing, especially not in the division,” Hoskins said Tuesday. “Some of it’s that, trying to see what do these guys have, trying to create my own book, so to say, on some of these pitchers. I think the other big part is just formulating a plan before the game, taking that plan into the at-bats and really being stubborn to that.” 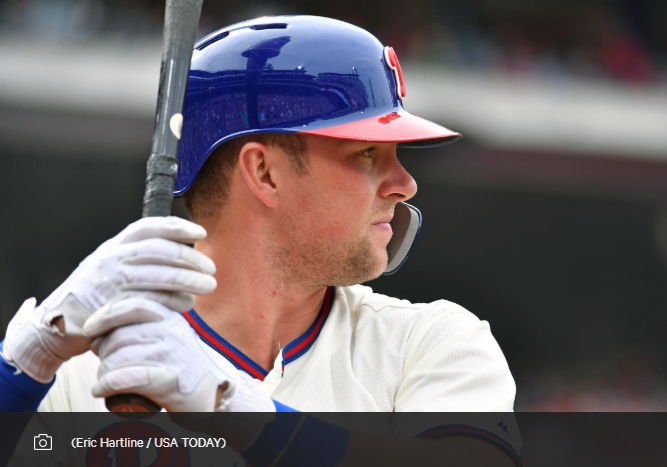 Hoskins’ big-league success has been rooted in his approach and plate patience. Since making his MLB debut on Aug. 10, 2017, Hoskins has seen the most pitches of any player in the big leagues, 4,603. His teammate Cesar Hernandez ranks second (4,421). During that span, Hoskins’ 4.51 pitches per plate appearance are also best in the big leagues. This season, Hoskins, 26, has shown an even sharper eye at the plate, averaging 4.72 pitches per plate appearance to lead the majors.

“Sometimes it takes four or five pitches in an at-bat to get what you’re looking for, and sometimes it comes with two strikes,” Hoskins said. “I think, at least right now, that’s happening. I think you’re seeing some good production because I’m not missing those pitches even with two strikes.”

Hoskins credited Phillies hitting coach John Mallee and assistant hitting coach Pedro Guerrero for helping him formulate a plan and talking strategy on how to take on certain pitchers.

“He hits to a plan a lot, so he’s looking for a certain pitch in a certain location,” Mallee said. “He’s ready to hit from the first pitch on, and he’s patient enough to wait for it. His bat-to-ball skills, he can foul things off when he’s fooled and beaten and that prolongs the at-bat. A lot of times, he’ll miss his pitch and foul it off, and then he’ll get two strikes and he’ll battle and battle and battle. The pitcher will finally make a mistake and he’ll hit it.” 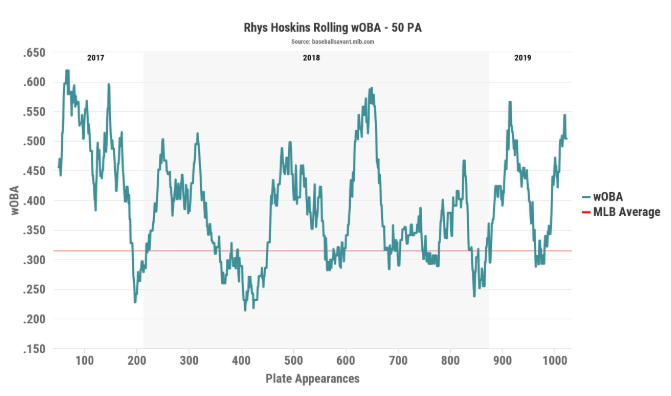 Part of what makes Hoskins a tough out is his ability to spoil pitches and prolong at-bats. It’s an innate skill, and Hoskins finds comfort in knowing he can foul off pitches and stay alive until he gets one he wants.

“It allows me to slow the game down when you get to two strikes or in a big situation, maybe the guy makes a really good pitch on you and you fall behind in the count, it just adds to the confidence,” Hoskins said. “This game is hard. Hitting is hard. If you’re able to accumulate that confidence, not only over the course of the season or a series but over the course of an at-bat, you feel pretty good. I think that’s what’s been happening.”

One trend that also has bucked the norm: Hoskins is a drastic reverse-splits hitter and thrives against right-handed pitchers. And he does it at an elite level. He entered Tuesday slugging .620 versus right-handers, fourth-best among qualified hitters. This is not unique to the 2019 season. Hoskins’ career .572 slugging percentage against righties ranks fifth among all right-handed hitters since 1974 (minimum of 700 plate appearances). Hoskins owns a career .269/.368/.572 line versus right-handers, compared with a .200/.380/.416 line against left-handers. 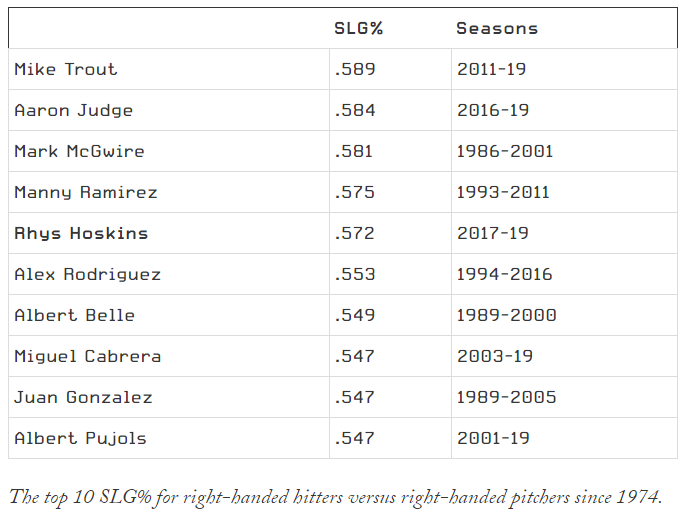 Hoskins can be susceptible to offspeed pitches low and away. It has been a point of emphasis since last season. It continues to be one area opposing pitchers have tried to exploit, though Hoskins has become better at making contact on pitches out of the zone, improving his O-Contact% from 60.2 percent last year to 68.5 percent in 2019.

“I think the approach is very competitive, which is why you see him every once in a while his body will be moving away from the pitch and he’ll just reach his one hand out and either foul a pitch off or maybe hook something down the line,” manager Gabe Kapler said. “It’s a determination. It’s a ‘I’m going to put this ball in play or I’m going to spoil a pitch or I’m going to see an additional pitch.’ He allows the homework he does to pay dividends. He has a good idea of what the pitcher is trying to do to him.” 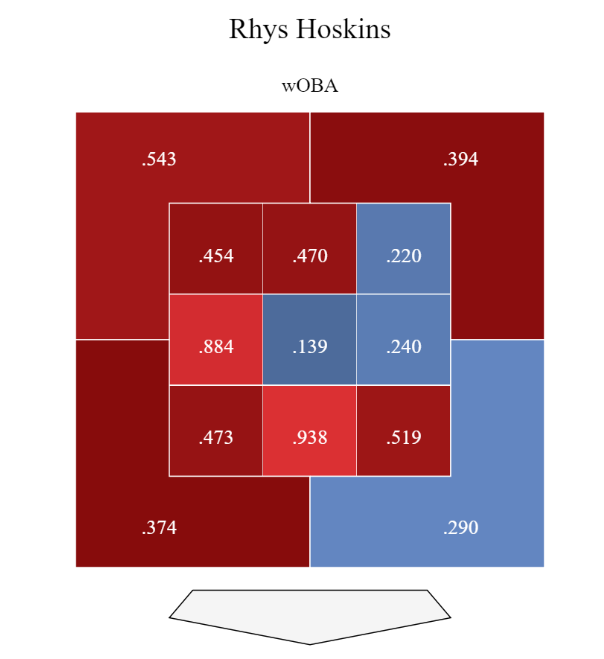 Like all hitters, Hoskins will endure slumps. He isn’t immune to that. Over the final six weeks of last season amid the Phillies’ collapse, Hoskins struggled and produced a .212/.314/.474 line. But the adjustments he has made this season in reducing how frequently he chases pitches and continuing to hit right-handed pitchers hard bode well for sustained success in the Phillies’ deep lineup.

“There are other times where maybe, in a similar spot last year where I wouldn’t have gotten pitches to hit, I think I am getting more pitches to hit, and that’s strictly a product of who’s hitting behind me, how deep this lineup is, our ability to score runs really quickly,” Hoskins said. “They’ve got to get outs. You can’t just pitch around guys and hope they get themselves out. I think we’ve shown we’re a pretty patient lineup. If we don’t get our hits, we’ll take our walks and that’s going to hurt them, too.”