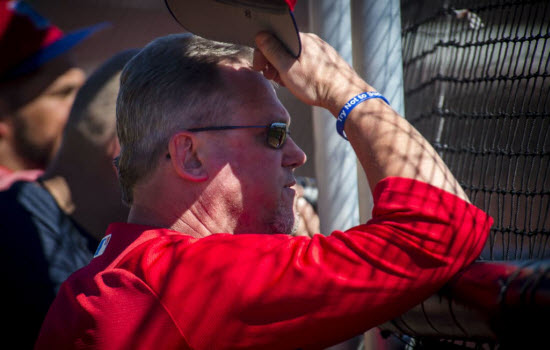 With a new Phillies coaching staff in place this spring, The Athletic is chatting with each of manager Gabe Kapler’s eight-person field staff for a Q&A.

CLEARWATER, Fla. – Phillies hitting coach John Mallee is in a familiar position.
His big-league coaching career has involved working with some of the best players in the game during the early stages of their careers – Giancarlo Stanton, Jose Altuve and Kris Bryant, to name a few. A Chicago native, Mallee, 48, joins the Phillies with an opportunity to mold a young, promising lineup that bolstered Philadelphia in the second half of last season. Some questions and answers have been edited for length and clarity.

Q1) The Athletic: How would you describe your hitting philosophy?

A1) Mallee: Play selfless team-winning baseball with a team-first mentality. Having the ability to manufacture runs. Runs are created with speed and aggressiveness. Manufacturing runs on the bases, going first to third, being able to tag and dirt-ball reads – those types of things. Try to create more run-scoring opportunities in the game instead of just trying to get a hit. Productive outs, how important each out is. You have 27 outs to play with and how productive can you make each out? Those are the things we talk about.

Weighted Runs Created Plus (wRC+) is something we talk about a lot. Certain launch angles are going to equate with certain batting averages. But you have to match that up with exit velocity. So you have to understand that it’s not just about hitting a fly ball. You have to hit a fly ball at a certain angle with a certain exit velocity. We talk mostly about hitting line drives at a certain angle, but if you just miss under the center of the ball and you hit it hard or you just miss over it and still hit it hard, its still a very productive hit.

Q2) The Athletic: Is it challenging to explain to players who you’re just starting to work with why that information is valuable and how to apply it?

A2) Mallee: There’s a lot of information out now and people just read it, and a lot of hitting coaches are trying to recreate these swing patterns and movements and tryto create the desired launch angle. But understanding what the desired launch angles are. And it also goes deeper into who you are. So if you’re a guy who doesn’t have a ton of exit velocity and you cant project if you hit the ball at 22-35 degrees, but its going to go out. If you dont have the exit velocity to create that, then those are the guys you talk more about hitting line drives.

Q3) The Athletic: You were with the Marlins, Astros and Cubs and now another young Phillies team. What do you like about working with young hitters who are in the early stages of their big-league careers?

A3) Mallee: They don’t have a ton of experience. They progress the more at bats they get. They’re very open to suggestions and adjustments. Working with a young group, they’re eager to learn and they want to be the best and they’re very talented. A couple things are important with the young guys and projecting if they’re going to hit is their ability to control the strike zone. You’re only as good as the pitch you swing at. Drafting players like the Cubs did or the Phillies have done with plate discipline, the {J.P.} Crawfords and the {Scott} Kingerys, all those guys, {Rhys} Hoskins, they all have plate discipline. With that plate discipline, and they all have strength, and then you match up the launch angles with that, it’s pretty exciting.

Its very exciting because they’re talented. You’re only as good as your players, right? You come in and they give you this type of talent to work with and all their makeup is off the charts and to be able to be around a group like that – and they’re going to have to learn to make adjustments. That’s why a lot of times the second year is tougher for a guy than the first year because the league has adjusted to the player. Now the player’s ability to adjust back to the league and the way they’re pitching and the way they get them out, that’s where the learning curve comes from. They have amazing aptitude, and that’s part of drafting the right players.

Q4) The Athletic: When did you know you wanted to be a hitting coach?

A4) Mallee: Well, when I got done playing, I thought I should’ve been a better player so I really started to study the swing. I started to understand it and then I started at a baseball school giving private lessons to kids. I started speaking at conventions and doing different things. I got an opportunity one day when I was working for the White Sox’s training center academy, and Ron Jackson was a Major League hitting coach and he was going to do the hitting presentation. I was just going to lead it, warm it up and he was going to take over. I forgot he was there and talked for 40 minutes. Jackson, came to me and said, “Do you want to be a hitting coach?” He goes, “No, no. You got a chance.” I got an interview with Milwaukee and started coaching in ’96 (at Single – A Beloit).

Q5) The Athletic: On your website www.johnmallee.com you have two hitting DVD’s.
(“Teaching the Professional Swing” and “Teaching Hitting Drills”)

A5) Mallee: They’re a little outdated, they’re a little older now. I was in much better shape and better looking then. But as the game changed and the philosophy changed, some of the mechanical things changed. It’s like, once we understood the story of the pitch, now we understand the story of the path. That’s why people are trying to match up the plane of their swing with the incoming pitch. And understanding the metrics of it all. Before it was, hit the ball on the ground hard. Now when you hit the ball on the ground, they way defense is positioned, you have to try to hit it over the infielders and in front of the outfielders if you’re a little guy. If you’re the other guys and they’re in a shift, you’ve got to try to hit it over.

Q7) The Athletic: What’s it like being back in the organization that drafted you in 1991?

A7) Mallee: It’s exciting. I’ve always been a Phillies fan because I played with them. It’s weird, I used to be No. 11 my whole life. I came here and I guess a guy named Jimmy Rollins is supposed to be pretty good. So I told the clubbie, well, just give me whatever number you’ve got. And he says, I’ll give you # 8 and I say, OK, cool. They day before I was leaving to come down here, I was cleaning out my closet and moving some things and found my old Phillies jersey. I turned it over and it was # 8. I had no idea. That was kind of crazy. I was down at the old stadium. I went to the original Hooters. Darren Daulton was my favorite player because I liked his hair. And Lenny’s, we used have breakfast there.

Q8) The Athletic: Was it tough with how things ended in Chicago? Do you look at it as the Phillies really want me?

A8) Mallee: To have somebody show interest in you – there were a couple other teams that were interested – to have them show it.. It’s never easy when you leave some place, especially when you’re successful. Our offense was very successful, and I watched the kids grow for three years and I wish them the best of luck. And I wished Houston the best of luck when I left there. And now my whole focus is on the men here with the Phillies.
They’re great players and to be part of that and to watch them grow every day as men and as a baseball player. Winning a World Series in Chicago when I’m from Chicago and to be part of that and experiencing Game 7, knowing what that feeling is, that’s all you ever think about. That you want that feeling again.

Q9) The Athletic: Have any Phillies players asked you about winning the World Series or that Game 7?

A9) Mallee: No. I just met {Carlos} Santana today (Feb. 16th), and he was on the other side. You’re ecstatic because you won, but you feel sorry for the other side, believe it or not. Because you have compassion. That was unbelievable, Game 7 after being down 3 games to 1, in the NLCS and the World Series. To come back and do that and watch those kids celebrate on the field, unbelievable.

I just told {Santana} when I met him, “You know what? It’s an honor to be able to coach you because I really enjoyed watching you play across the field. And to see you and your approach and how you work counts and how professional you were and how great a hitter you were, we have a lot of young hitters here that you’re going to be able to instill that in them. And that’s really and honor to be part of that.” He was very receptive, He’s amazing.

Q10) The Athletic: Last question that every Chicagoan must be asked: Deep dish pizza – Yay or Nay?