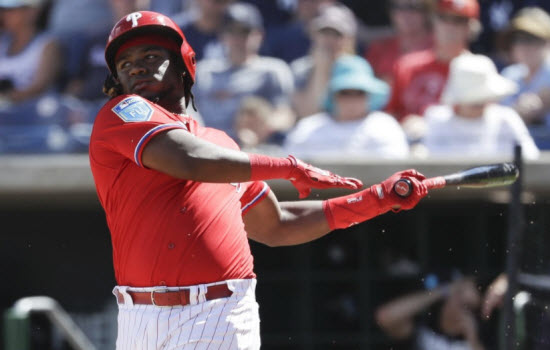 CLEARWATER, Fla. — Maikel Franco hit his first home run of spring training on Sunday. It was a beautiful shot to left field, a nice way to begin perhaps the most crucial camp of his career. But it was the placement of his left foot — the one that guides Franco’s swing — that might have been the most promising sight.

ohn Mallee, the Phillies’ new hitting coach, pored over footage of Franco this winter before arriving at camp. The coach noticed a glaring flaw. Franco’s batting stance was so open that it began with his left foot practically pointing at third base. This left Franco vulnerable, Mallee thought.

On Sunday, Franco began with an almost closed stance. He lifted his front leg slightly once the pitcher began his delivery. Franco planted it in line with his back leg. It was a simple process and Franco appeared relaxed as he connected with the baseball.

“I’m trying to use more of my hip and have more balance and rhythm,” Franco said. “I just feel really comfortable right now and I want to continue to do it.”

Last season, his swing was somewhat frantic. Franco’s stance was so open that he had to take a wide step with his front leg before swinging once his legs were aligned. The Phillies hoped last season would be Franco’s breakout season. It instead was a brutal campaign that saw him slash .230/.409/.690, all career lows.

“It’s closing up,” Mallee said of Franco’s stance. “He’s closing his hips up and loading his hips better and he’s staying more direct, so you’re not going to see the big swings where his helmet falls off because his momentum and energy is staying there and he’s stabilizing his head so he can recognize pitches better.”

Franco’s old stance crippled him against outside pitches, especially ones that were low. His reaction time was limited because of the effort it took to sweep his front leg. Of the 2,343 pitches he saw, 31.41 percent of them were low and away. Franco loved to swing at them, chasing 32 percent of them but batting just .145 against them. He had no chance.

Mallee said the changes will allow Franco to cover more of the strike zone and defend himself against different types of pitches. It will also help his reaction time and discipline.

“I’m really impressed with the direction of his stride,” manager Gabe Kapler said. “I’m really impressed because we saw video of last year and we’re already seeing noticeable improvements. He’s made adjustments with his swing. It’s not just a mental adjustment or an approach adjustment; there have been some mechanical changes and they’re already noticeable. He’s really excited about it.”

Observers have speculated that this season could be Franco’s last chance to prove he is deserving of a long-term role. The Phillies have cash to spend and third base could be a place to spend it next winter. Franco knows that, and perhaps that helped him easily agree to alter his stance when Mallee approached him on their first day together. Carlos Santana, the veteran the Phillies signed this winter and immediately placed next to Franco in the clubhouse, has been a big help in the transition, Mallee said.

The first home run of spring will surely not guarantee a breakout season for Franco. But an altered stance could lay the foundation for the season Franco needs.

“I feel better than ever,” Franco said. “Let’s keep working hard every single day and keep being positive.”