PHILADELPHIA — The Phillies have found Matt Stairs’ replacement in the batting cage.

The club announced Friday afternoon that three coaches have joined manager Gabe Kapler’s staff: Dusty Wathan, Rick Kranitz and John Mallee, who spent the past three seasons as the Cubs’ hitting coach. Mallee replaces Stairs, who enjoyed success as the Phillies’ hitting coach in 2017. But after the team announced that Pete Mackanin would not return, it informed his staff that they should explore other employment opportunities. Stairs took a job with the Padres. 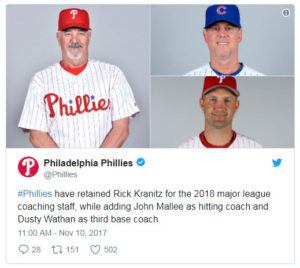 Cubs manager Joe Maddon said in October that he expected his entire coaching staff to return, only to later make changes after the Cubs lost to the Dodgers in the National League Championship Series.

“I have no regrets and stand by my work,” Mallee tweeted Oct. 26. “I wish nothing but the best for the Cubs organization and all the amazing people I met along the way, especially my hitters. See you from across the field.”

Wathan, 44, will be the third-base coach. He was a finalist for the Phils’ managerial job, falling short to Kapler. He has been a manager in Philadelphia’s farm system the past 10 seasons.

The Phillies will announce the remainder of their coaching staff as roles are filled. Pitching coach Bob McClure, first-base coach Mickey Morandini and bullpen coach John McLaren are unlikely to return. It is unclear if Juan Samuel, who was the third-base coach, will return in a different role. Former bench coach Larry Bowa took a job as an advisor to general manager Matt Klentak.

Asked last week if he thinks he needs a grizzled coach or two, considering he has very limited managing or coaching experience, Kapler said, “Quite simply and directly, I believe in building diversity. One of the things that I don’t think — and I have a feeling I’ll get support from Matt [Klentak] here — is I don’t want seven people in the dugout who think just like me. I value somebody with a lot of veteran experience. I have a tremendous amount of value for someone who thinks more progressively, a guy that has been out at first base and has picked out tells on a pitcher his whole life can teach me so much, and I want to be able to drink that up.

“So I’d say diversity of thought, diversity of experience, that’s a strong way to build a Major League coaching staff.”