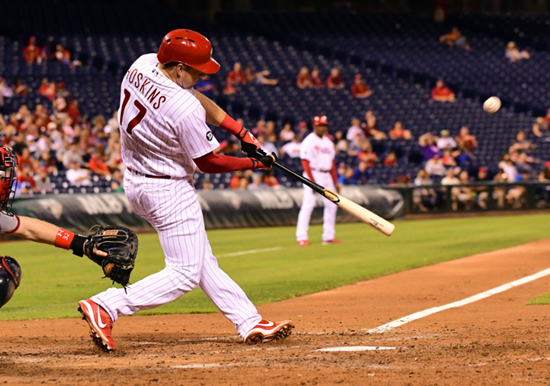 By Rob Maaddi, The Associated Press

PHILADELPHIA >> Rhys Hoskins let two fastballs down the middle go for strikes and somehow saw another one. He crushed it.

Nola (2-1) allowed two runs, six hits and struck out nine to help the Phillies win their third straight game and improve to 8-1 at home. The Pirates have lost five of six after an 11-4 start.

Pittsburgh’s Steven Brault gave up two runs and two hits in 5 1/3 innings. The lefty took a shutout into the sixth before things unraveled.  Brault hit Carlos Santana with a pitch and Odubel Herrera followed with a single. Michael Feliz (0-1) entered to face Hoskins, who drove a 1-2 pitch into the left-field seats for a 3-2 lead.

“Usually, you take a couple balls down the middle, you don’t see another one but I got away with it,” Hoskins said.  Hoskins has become a dangerous hitter when he’s behind in the count with two strikes. He’s 8 for 17 with two homers if the count is 1-2 or 0-2.

“He told me to try to hit like there’s no count,” Hoskins said. “If you control your heart rate and are comfortable in the box, good things happen.” Pirates manager Clint Hurdle questioned the pitch selection to Hoskins with two strikes.  “He just threw the wrong pitch to a good hitter,” Hurdle said.

Luis Garcia got two outs in the eighth and Hector Neris got the last four for his fourth save. The Phillies, who lost 96 games last year, are six games over .500 for the first time since they were 25-19 on May 22, 2016.

Sean Rodriguez hit Nola’s second pitch the opposite way off the scoreboard on the facing of the second deck in right field for his first career leadoff homer.  Starling Marte’s RBI single on a shallow fly that bounced off second baseman Cesar Hernandez’s glove gave the Pirates a 2-0 lead in the sixth.

Hoskins and Scott Kingery had RBI singles in a three-run eighth for Philadelphia.  Nola has a 2.28 ERA over his last eight starts, dating to last season.

“He showed a lot of toughness and pitched an efficient game,” Kapler said. “As he gets deeper, he gets stronger.”