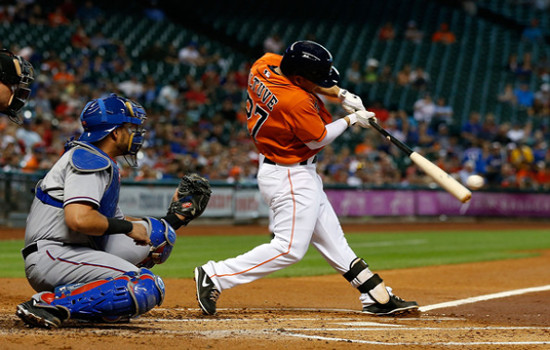 ARLINGTON — A routine trip to the ballpark earlier this season sent Astros hitting coach John Mallee on an alternate route because of construction.

Mallee’s detour wound up taking him to a side of the ballpark he rarely sees, the one that faces the busy Highway 59 overpass. Mallee glanced at the façade of Minute Maid Park and noticed a huge banner hanging with a picture of second baseman Jose Altuve, who’s currently closing in on the American League batting title. The banner symbolized the 5-foot-6 second baseman had become the face of the franchise, the most recognizable player and a cornerstone for the future.

“I told him when I came in, I said, ‘Do you realize how important you are to this organization, to this city?'” Mallee said. “‘To drive by and see your picture up there every day from where you came from and how hard it’s been for you to get where you are, that should make you have pride and want to work and be the best you can be, because you are the Houston Astros.'” Mallee admitted the conversation nearly brought tears to his eyes, because he knows the amount of work both he, assistant hitting coach Ralph Dickenson and Altuve had done. Altuve did his part by coming to spring camp 10 pounds lighter, and then Mallee sat him down and set out three goals he wanted him to achieve.

“He worked so hard in the offseason to get himself physically in shape so he can withstand a full season and perform at the best of his ability, and I was very proud of him for that,” Mallee said.  “We talked the first day [of spring] and said, ‘Where can we improve? Where do you want to get better at? What do you think, and I’ll give you want that think, and let’s come to a common ground here and let’s put a plan together for the course of the season.'”

Goal No. 1: Improve his strike-zone discipline That led to a change in his swing mechanics to help better identify offspeed pitches. Altuve was coming off a pretty good season, hitting .283 with 52 RBIs, 85 strikeouts and 32 walks in 152 games in 2013, so he was skeptical at first to changes. “I had three years in the big leagues and had a little success, and why change at this point?” Altuve said. “But I changed it, and it’s a big difference. I give [Mallee] credit. I hope to keep working with him for a long time.”

Altuve used to stride early to his toe when he was ready to swing, which caused him to be out front on a lot of offspeed stuff. Mallee added a knee tuck to help load the hips, which allowed him to not put his front foot down until he was ready to swing. “He was able to time up pitches a lot better, because he wasn’t committed early,” Mallee said. “So he basically stayed in motion, and now he’s a lot more on time on offspeed pitches, and if you look at his numbers compared to last year, the biggest difference is his ability to hit offspeed.”

Altuve has also blossomed into a terrific two-strike hitter, batting .284 (up from .231 in 2013). “We did a lot of short-pitch, a lot of different zone hitting drills in batting practice, and he was only supposed to swing at certain pitches in batting practice and those types of things, and try to zero in the plate discipline,” Mallee said. “That was our goal, and he took all spring and worked on it and took a couple of days to get used to the leg kick, and he kept it.”

Goal No. 2: Make the All-Star team
Altuve was a clear-cut All-Star after hitting .411 in June, and he wound up making his second Midsummer Classic, his first representing the AL. It was at that point, with Altuve near the top of the leaderboard in batting average, that the final goal laid out by Altuve and Mallee began to look like reality.

Goal No. 3: Win a batting title, something no other Astros player has done
Altuve enters the final series of the season in great position to achieve it with a .343 batting average, nine points ahead of the Tigers’ Victor Martinez (.334). “[Mallee] told me that in Spring Training, and I thought, ‘This guy is crazy,'” Altuve said. “But he’s not as crazy as I thought.” Altuve hasn’t let up all season, and he is batting .384 in September heading into the final weekend. As the season progressed and the changes to his swing became a habit, Altuve didn’t stop trying to improve. He, Mallee and Dickenson studied pitchers and how they tried to get the second baseman out. More adjustments were made. “We would go through his at-bats, and he would come to me and say, ‘Hey, this guy pitched me like this, and I’m going to do this,'” Mallee said. “It sounds great. The adjustments he makes during the course of the game have been outstanding.”

The majority of Altuve’s hits (117 of 222) have come in the first two pitches of at-bats, which fits in with the selective-aggressive approach Mallee has preached. Because of his great bat control, it doesn’t have to be a perfect pitch for him to take a hack.
“And he can hit the ball hard,” Mallee said. “His ability to run, if he does mishit some balls, he can beat them out.” And now that his star pupil is three games away from winning a batting title, Mallee is bursting with pride.

“I’m just so proud of him,” Mallee said. “I get goosebumps when I talk about him, just because of the person and how hard he works. We have a lot of guys like him in that regard.”
Brian McTaggart is a reporter for MLB.com and writes an MLBlog, Tag’s Lines.
Follow @brianmctaggart on Twitter. This story was not subject to the approval of Major League Baseball or its clubs.