Cubs have everything it takes to finally win World Series

Ghostbusters: Cubs have everything it takes to finally win World Series

Chicago has the best combination of pitching, hitting and fielding in baseball. So the question isn’t whether the Cubs will win their first championship since 1908. It’s how could they not?

This story appeared in the Oct. 10, 2010 issue of SPORTS ILLUSTRATED.

The Chicago Cubs know how to party. They won 57 times this year at Wrigley Field, the most in the 101 seasons the franchise has played in the heirloom of a ballpark at the corner of Addison and Clark. After each of those victories, just before entering their newly renovated 30,000-square-foot clubhouse proper, which includes a sensory-deprivation tank and a yoga studio, they repaired to a dedicated celebration room. Amid strobe lights, a smoke machine and pulsating dance music, the Cubs would spend 10 minutes reveling in victory.

After a seasonlong party, Chicago enters the playoffs as the strongest favorite since the legendary 1998 Yankees. Three of the nine other playoff entrants may have a chance to knock off the Cubs, but based on regular-season results, one team in particular has almost no shot of beating them: the Cubs themselves.

It’s not just that Chicago’s pitchers allowed the fewest runs in the majors and that its hitters scored more runs than every team except Boston and Colorado. The Cubs also boast the stingiest defensive unit in a quarter of a century. Under a think tank of no fewer than nine coaches, including a “Run Prevention Coordinator,” and implemented by some of the most athletic defenders in baseball, the Cubs essentially have opened a traveling exhibit of the Art Institute of Chicago. Their defense is that exquisite. Call it a Cub-ist aesthetic.

“I don’t know the last time we beat ourselves,” president Theo Epstein says. “Maybe once every two weeks you can count on giving an opponent four outs in an inning, which forces your pitcher to throw extra pitches and then you have to go to your bullpen a little earlier than you want. This year it seems like that happened three or four times the whole year.”

The Cubs have three Cy Young Award candidates (righthanded starters Jake Arrieta and Kyle Hendricks and lefty Jon Lester) and two Most Valuable Player Award front-runners (third baseman Kris Bryant and first baseman Anthony Rizzo), but defense is the secret sauce to their pursuit of the franchise’s first World Series title since 1908. The only task at Wrigley Field this month more difficult than finding tickets may be for a visiting player to find hits.

How the Cubs were built: Turning baseball’s longest-running losers into winners

Defense is even more important in the postseason, when games are usually lower scoring. Starting in 2012, when the playoffs expanded to include two wild-card berths in each league, runs declined from 8.40 per game in the regular season to 7.55 in the postseason, a 10.1% drop.

Postseasons have been fickle for favorites since 1995, when the wild card was introduced. Only four of 26 teams (including ties) with the best record entering the playoffs in that time have won the World Series: the 1998 and 2009 Yankees and the 2007 and ’13 Red Sox. But Chicago is not your ordinary “best record” team. The Cubs are only the eighth team in the past 40 years to win at least eight more games than the next best club. Four of the previous eight teams so far ahead of the field won the World Series.

Chicago enters the postseason healthy and with no obvious flaws. The question, 108 years since their last championship, no longer is whether the Cubs can win the World Series. The question is, how can they not win it? Bad bounces, hot pitchers, fluke plays—each can cause a favorite to fall in October. The Cubs, though, have thrown plenty of brainpower and talent at making sure they won’t lose because of their defense. 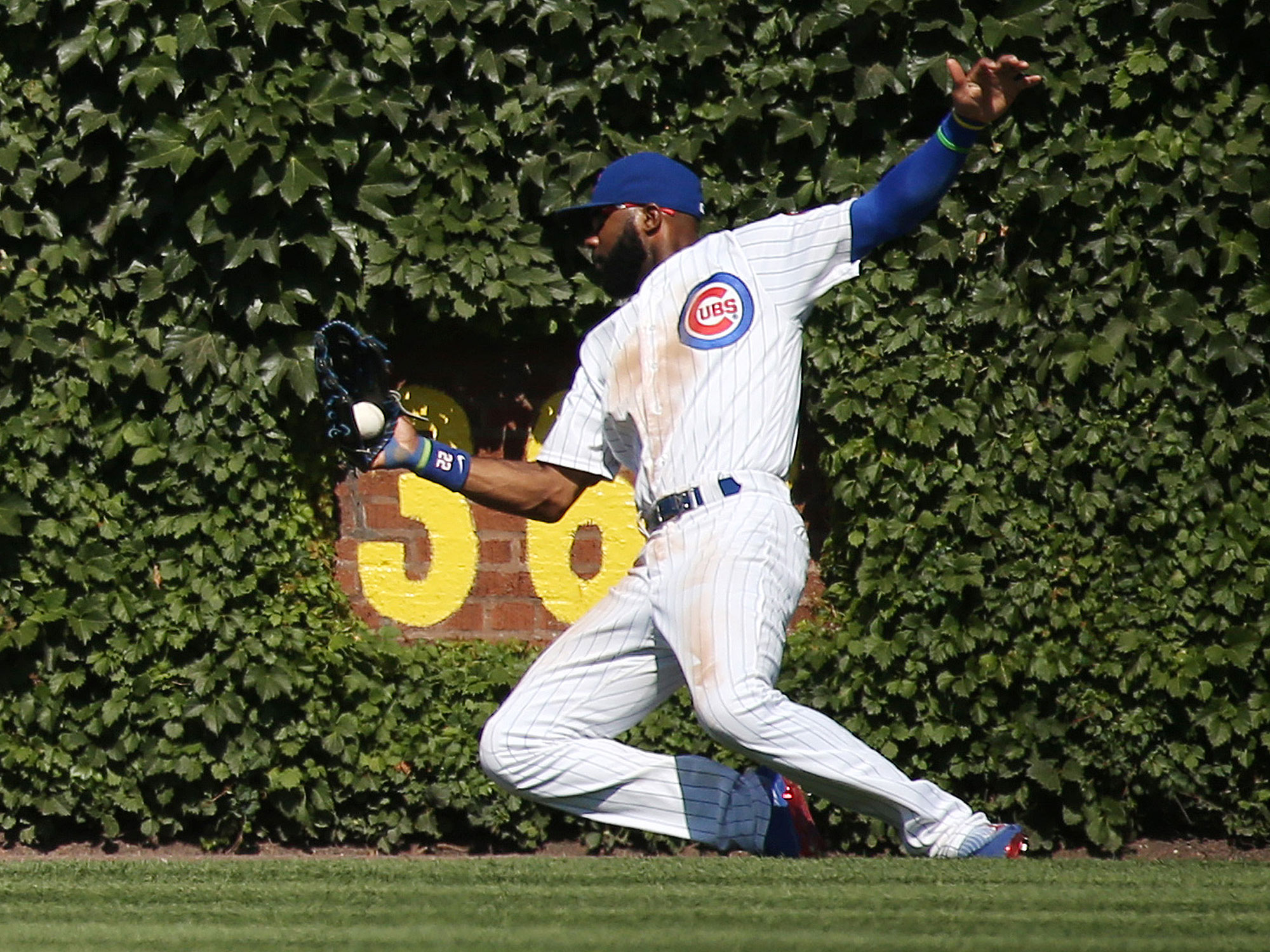 The Cubs’ defensive paradigm began with a hitting coach. In October 2014, Epstein hired Astros hitting coach John Mallee, who grew up a Cubs fan as the son of a Chicago police officer.Mallee mentioned how in Houston he benefited from having somebody who could coordinate all things hitting, including scouting reports and video. Epstein liked the idea. He quickly decided to dedicate two “coordinators,” one to oversee the offensive side of the game and one for the defensive side. For the former, Epstein named video coordinator Nate Halm, then 29 and a former college catcher at Seton Hall and Miami (Fla.), to the position of Coordinator, Advance Scouting. Unoficially, Halm became the Run Production Coordinator.

For the second coordinator position—unofficially, the Run Prevention Coordinator—Epstein hired Tommy Hottovy, then 33, in December 2014. Hottovy pitched in 17 major league games in 10 professional seasons before blowing out his shoulder in Cubs spring training camp in ’14. While rehabbing his shoulder that summer, Hottovy, who graduated from Wichita State in ’04 with a degree in business administration and a minor in economics, took a Sabermetrics 101 online course from Boston University.
Hottovy is the bridge between the back-office analytical wonks and the on-field staff. He analyzes the vast amounts of numerical and video data as well as charting his own observations.

The Cubs’ game plans for pitching and defense begin with pitching coach Chris Bosio. He, Hottovy and catching instructor Mike Borzello coordinate the strategy—how to attack hitters and where to best position the seven players behind the pitcher. Bullpen coach Lester Strode conveys the plan to the relievers.

First base coach Brandon Hyde and bench coach Dave Martinez make in-game positioning adjustments. And third base coach Gary Jones is the infield instructor who has taken the rough edges off Bryant’s game at the hot corner. Though 6’ 5″, Bryant is best at playing lower, which has improved his reaction to slow rollers and grass-skimmers, and he has rid himself of a habit of patting the ball in his glove once or twice before throwing.

“This is a nice example of what happens when you marry pitching and defense,” Epstein says. “It’s a beautiful thing when it works together. It’s hard to quantify some of it, like the confidence it breeds in a pitcher. When you’re confident that balls in play are going to be outs, it’s easier to game-plan.”MLB

Manager Joe Maddon likes to say that the team’s motto for positioning fielders is, “We catch line drives.” The system is designed to defend the likely areas of hard-hit balls. In an age when shifts are all the rage—and Maddon was one of the earliest adopters of the strategy as Angels bench coach in the late 1990s—the Cubs are among the teams that shift the least. Epstein, however, scoffed at the notion that Chicago does not shift much.
“We’re last in the league in shifts because of the way they define it,” Epstein says. The standard definition is when the “off” middle infielder—the shortstop when a lefthanded batter is at the plate; the second baseman when a righthanded batter is up—is positioned on the other side of second base. “Believe me, we position for every pitch,” Epstein says. “We just don’t meet the criteria of ‘shift.’ We do it through scouting reports and numbers and based on our own observations.”

The Cubs, however, do differ from most clubs in positioning their fielders. Most teams begin with spray charts—monitoring where a hitter most often hits the ball. While Chicago uses spray charts, it prefers to put more confidence in its pitchers and the kind of contact they elicit. The question the Cubs like to ask: Where is the optimum position for each fielder for this pitcher to secure an out?

After such planning, skill takes over, and the Cubs are loaded with it. Last winter Epstein raised eyebrows in the industry by giving $184 million over eight years to free agent Jason Heyward, the richest investment ever for an outfielder who had never driven in or scored 100 runs. They paid that steep price in part because of his superior defense in rightfield. Heyward has been a bust at the plate, hitting .230 with just seven home runs, but his defense has been spectacular.

“His attention to detail is impressive,” Epstein says. “He’s extremely prepared and knows exactly what we’re trying to do. He knows the game situation, he reads swings, he anticipates where the ball will be hit.

“He’s so smart, it’s almost like he’s going through a computer in his head. And he throws with pinpoint accuracy.”

When Heyward is joined by superutility player Javier Baez, the Cubs have two of the best defenders in baseball on the field. Baez is a natural shortstop who has played all four infield positions—mostly third base and second base—as well as leftfield. Maddon calls Baez “the best tagger I’ve ever seen.”

Epstein goes even further, saying Baez’s skills at tagging runners “are as good as any player at any aspect in the game. Javy Baez is to tagging what Giancarlo Stanton is to raw power. He’s worth a couple of wins a year.” 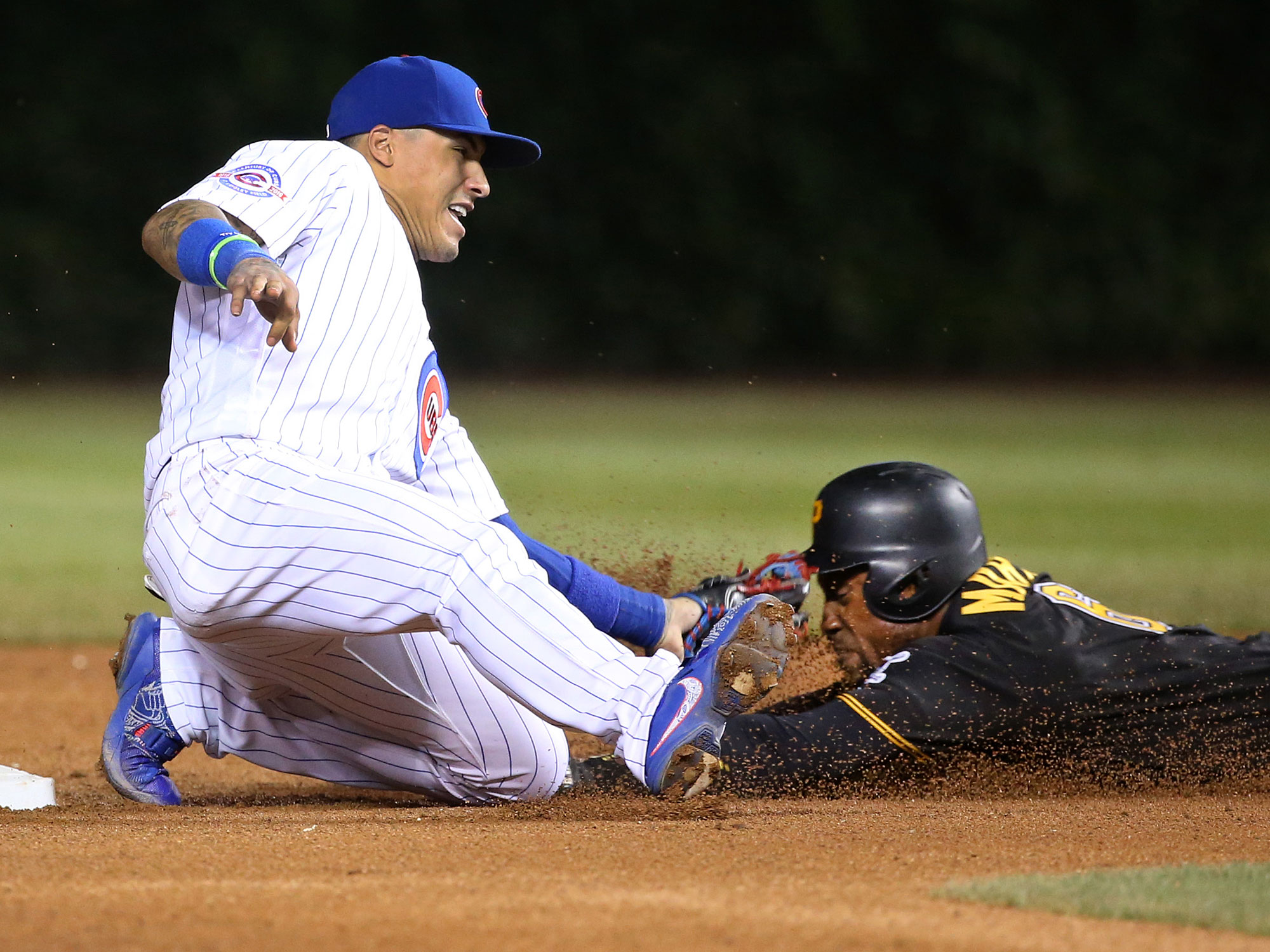 Epstein explains that in the era of instant replay, the biggest variable in the outcome of a stolen base attempt at second base—with all other variables being equal (an average runner, a pitcher with average time to the plate, an average throw from the catcher)—is the tagging prowess of the middle infielder. Baez’s ability “to know where the runner’s hand and foot are in space without looking, then almost instantaneously catch the ball, control it and tag is amazing,” says Epstein.

Rizzo is an elite first baseman. Shortstop Addison Russell, though he lacks outstanding arm strength, is light and quick on his feet. And centerfielder Dexter Fowler is having his best defensive season since his rookie year of 2008, according to Fangraphs’ defensive runs saved.

So good are the Cubs at pitching and defense that in their 103 wins, they allowed a total of 15 unearned runs. Veteran pitchers Arrieta (.242), Hendricks (.252), Lester (.258) and John Lackey (.259) all have allowed the lowest batting averages on balls in play in their careers, and they will all enter the postseason rested and healthy. So what’s an opponent to do?