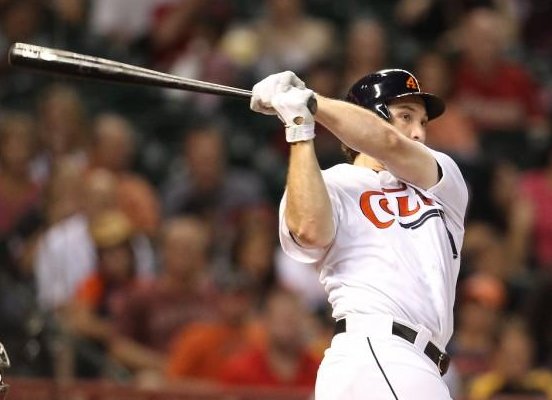 Wallace tries out tweaks to swing
There were moments when Brett Wallace felt right last season. His stroke was smooth, his swing was solid, and his bat cracked upon contact. Wallace was too often off-balance, though, hitting .253 and striking out 73 times in 66 games.

A strong 2013 spring training could make Wallace the opening-day first baseman. He arrived at Osceola County Stadium prepared for the challenge.

Following the leadership of new hitting coach John Mallee, Wallace recently made several key adjustments to his swing. His hands are slightly higher and move more before a pitch, mirroring a stance Wallace used when he was younger. The most dramatic change is found in Wallace’s legs, which are spread apart farther and display a block shape prior to a pitch’s arrival, with his left heel slightly raised.

“I’m putting myself in a position to where my legs work more, and I’m doing it every swing, not just once in a while. … You’ll see me using my back side a little more to stay in,” Wallace said Sunday during an informal practice.
Mallee broke down Wallace’s swing during the offseason via video. After watching the third-year veteran sting balls hit off a tee Sunday, then rocket shots upward and out of a minor league field, Mallee embraced his first proud moment as the Astros’ hitting coach.

“(Wallace is) a monster,” Mallee said.
Porter, Wallace have sit-down
The Astros will gladly take a career year from Brett Wallace. But right now, they just need the 26-year-old to stay motivated and fulfill his potential.

Manager Bo Porter had a one-on-one talk with Wallace on Sunday, telling the No. 13 overall pick of the 2008 amateur draft he could be the key piece that allows the team to exceed expectations this season.

First base and designated hitter are stacked for the Astros heading into camp. Wallace can play both positions and third base, and Porter asserted that Wallace will get his at-bats in 2013 if he delivers at the plate.

“I thought it was very important for him to know just how important he is to the overall success of this ballclub. … I told him, ‘We are looking for you to be an integral part of this team. Don’t let the different things that are taking place affect you and let your mind go elsewhere,’ ” Porter said.

Altuve said it wasn’t a coincidence that expected starters such as Justin Maxwell, Brett Wallace, Gonzalez and himself arrived in camp early. During the Astros’ uniform launch party at Minute Maid Park in December, the group decided to get a head start on spring training.

“We wanted to get everybody together, and I feel happy they’re here a little earlier,” Altuve said.