Angling for success: Are we watching the Maikel Franco we were always promised? 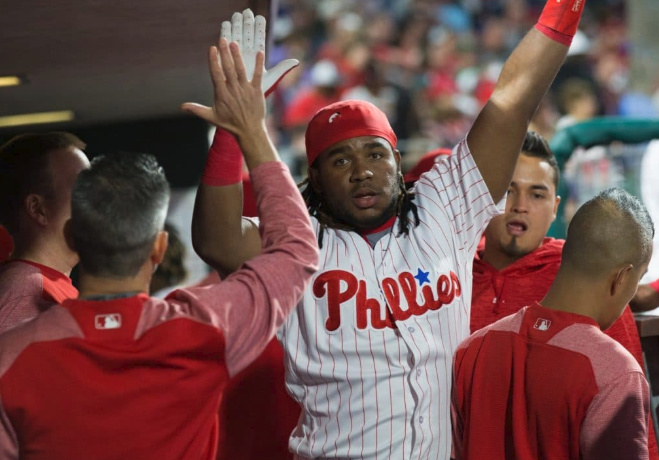 The opposing starter Maikel Franco had singled against the night before was tossing a football down the third-base line. Some of his Phillies teammates were stretching in shallow right field. Four hours before his 3-for-5, two-RBI night began, Franco stood at home plate taking soft underhand tosses from hitting coach John Mallee and launching them to the deepest parts of Citizens Bank Park.

Mallee paused, stepped out from behind the screen, and motioned twice with his arms and torso, mimicking the right and wrong ways to explode through the ball on contact. Franco nodded, then again commenced the laser show, ripping eight straight balls deep into right-center field. Over and over, one after another.

The goal of the early batting practice session on Wednesday was the same one Mallee conceived when he inherited his new ball club this offseason and laid his eyes on Franco’s tape. The 25-year-old third baseman’s bat path was too steep down to the ball, and he needed to round it out so he could drive up through the ball, instead of down on top of it. A steep bat path leads to grounders. Franco’s power is conducive to slugging homers.

“That’s why he never got to what he could be, because it was too many balls going on the ground,” Mallee said before Wednesday’s game from the Phillies dugout.

In the Phillies’ 11-3 hammering of the Giants, Franco ripped an RBI single in the first, unloaded his team-leading seventh homer of the year in the fourth — a 435-foot cannon shot to deep left-center — and smoked another single up the middle in the sixth.

This is the Maikel Franco that Mallee thought he could unlock, one with a .540 slugging percentage that ranks in the 83rd percentile, 29th overall out of 172 qualified hitters. His slugging percentage hasn’t been this high this far into a season since his breakout rookie year in 2015.

Flattening Franco’s steep swing will help him create backspin, and allow him to “get on plane with the pitch,” as Mallee says. The concept of mirroring the path of the pitch with your bat goes back to Ted Williams. Malle isn’t just trumpeting some newfangled propaganda, part of the Launch Angle Revolution. This is a diagram from the hitting bible Williams published, “The Science of Hitting.” 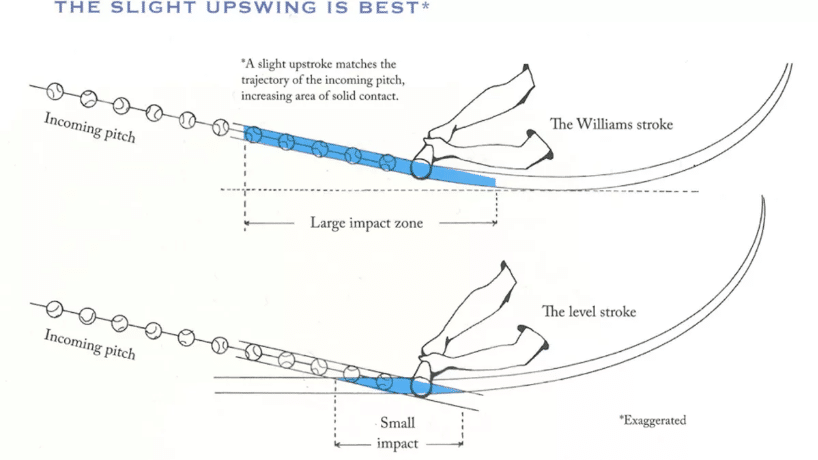 To create this optimal swing path through the pitch — one that must be a slight uppercut because the ball is coming downhill — Franco needed to adjust what Mallee calls his “spine angle.”

To get his point across, Mallee asks Franco a simple question. If you wanted to hit the ball directly into the dirt, how would you do that? The obvious answer is for the right-handed Franco to dip his front (left) shoulder and swing down as if he’s chopping wood. Now, Mallee asks, if you wanted to hit the ball to the top of the cage, how would you do it? The obvious answer is for Franco to point his front shoulder toward the sky and drop his back shoulder as low as possible as if he were swinging at a piñata or trying to knock loose a ball stuck in a tree.

The happy medium between the two — one that promotes productive line drives at run-producing launch angles — is where Mallee wants Franco to live. To accomplish this, his spine has to tilt back as he comes through his swing.

“I totally get it,” Franco said Tuesday. “I totally understand why it’s going to help me, why it’s better for me, and that’s what I’ve been doing. I always listen. Mallee is doing an amazing job for me.”

Before they could implement the proper spine angle and shoulder positioning, they needed to fix his stance — which they worked on during spring training. Franco closed off his feet, as his prior open stance made him step in the bucket and fall down the third-base line.

“We were able to get him to stride and advance forward toward the pitcher and it’s kept him on more balls that are out over the plate,” Mallee said. “That’s why he’s getting to a lot more balls. His strikeout rate is down. He’s making better decisions in the box.”

Never was this change (and its positive effect) more apparent than Franco’s single Sunday in Washington D.C., which capped a nine-pitch at-bat against two-time reigning Cy Young winner Max Scherzer. Franco slapped an outside 94 mph fastball to center; that he made any contact at all with the pitch was remarkable, and a direct result of his stance change.

“If I’m open, no chance I can get that pitch,” Franco said. It was the first time in his career he’d logged a base hit on a pitch that hard and that far outside.

Now that the stance is settled, it was time to alter Franco’s swing path by using cues for his shoulder and spine alignment. This instruction isn’t coming in the linear teacher-to-student fashion it often does. Mallee didn’t say “Do this” or “Do that.” It was, instead, a give and take. He asked Franco, “If you wanted to hit a ball this way, how would you do it?” The conversation was dynamic, not one-directional. This is how he taught his pupil the concept of spine angle.

“We have a good relationship, good communication,” Franco said.

To get an idea of what Franco’s improved spine angle looks like in action, here’s a side view of a homer Franco hit Sunday afternoon after the Phils chased Scherzer.

The spine angle stays tilted back for the entire swing. Perfect. As he brings the bat around and through the zone, his shoulders begin to tilt more and more. Phenomenal.

He’s barreling up the ball more, both by the eye test and by Statcast’s Barrelsmetric. Franco’s average launch angle, however, is down from 11.4 degrees last year to 9.2. But that stat is misleading. Mallee is not worried about it, because Franco is hitting the ball hard — his exit velocity ranks in the 77th percentile — and because they’re seeing improvements in aspects of his launch angle, even if calculating the overall average obscures that.

“He’s making more progress, so he’s missing some balls and they’re going into the ground, but when he clicks them he’s getting them more in the air,” Mallee said.

Below is a chart of every batted ball Maikel Franco hit in 2017 and 2018, separated into nine buckets, each containing 10 degrees of launch angle. The colors of the bars represent the average MLB slugging percentage generated from balls hit at that launch angle range — the redder the bar, the higher the slugging percentage. In other words, you want red bars as high as possible, and blue bars as low as possible. The most optimal launch angles for hitters are between 20-30 degrees. 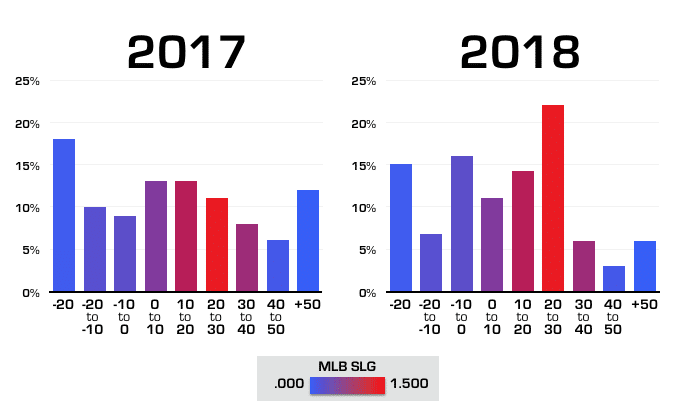 In 2017, Franco was hitting around 10 percent of his batted balls in that preferred 20-30 degree bucket. There were four launch angle buckets in which he hit a higher percentage of his balls in play. This year, he’s hit about 22 percent of his balls in play in that optimal range, more than any other. To hammer home the difference, let’s look at the change from 2017 to 2018 in one graph. 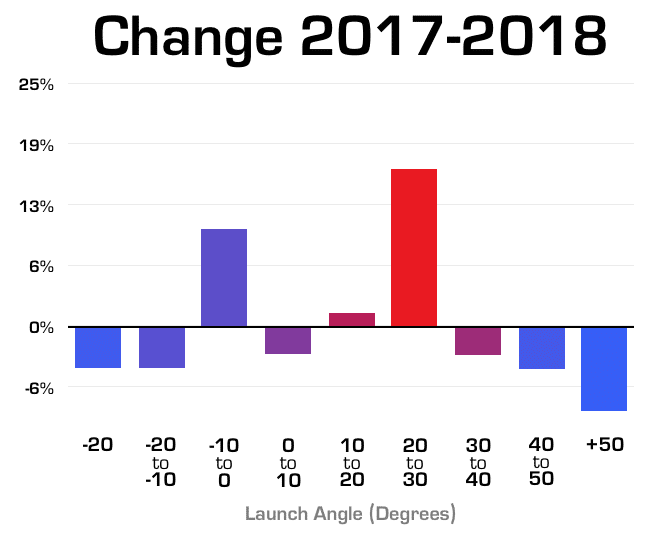 This has all led to a more consistent Maikel Franco than we’re accustomed to seeing. There are usually severe peaks (too fleeting) and valleys (too low). Mallee may be tapping into Franco’s natural athleticism and strength and, through helpful coaching, allowing Franco to discover the natural motions without force-feeding him the lessons.

“As a hitter myself recalling some of these conversations, those are the conversations that were really valuable because you started to feel your body get into those positions naturally,” said manager Gabe Kapler.

In his fifth and final at-bat with a 10-run lead in the eighth inning Wednesday and three hits already under his belt, Franco popped up a hanging curveball. Frustrated, he smacked his helmet with his bat, hard. You can hear the field mic pick up the sound of wood meeting carbon fiber. He was not content to rest on his laurels and check out because he already had three base knocks.

This intensity feels new, maybe because it’s coming in front of a backdrop of success. Or, maybe because it’s the start of the Maikel Franco the Phillies have been searching for, one that’s taken three different hitting coaches to find. It’s still too early to anoint this version of Franco as the same one who will don Phillies pinstripes next year, or even next month. All we know is what we’re seeing, and why we’re seeing it. Franco is internalizing suggestions and changes, and is benefiting from them.

He slammed balls around the ballpark during extra BP at 3 p.m., then slammed his bat down seven hours later after the clock passed 10 p.m.

“We love to see that kind of fire. In fact, one of the things we’ll say frequently when a guy’s had a good game and he’s walking up to the plate for the last time is get greedy,” Kapler said. “Be greedy here, don’t give any at-bats away. … I’m really glad he was locked in mentally in that last at-bat. Really cool.”

It paints a different picture than the Franco who admitted he didn’t have a plate approach in 2016, or the Franco who was almost sent down last season, reportedly distracted by an overemphasis on analytics. He doesn’t look distracted now.

We’ve seen Franco make changes in spring training, then fail to implement them in the regular season. Maybe, just maybe, we’re watching what happens when those changes stick.